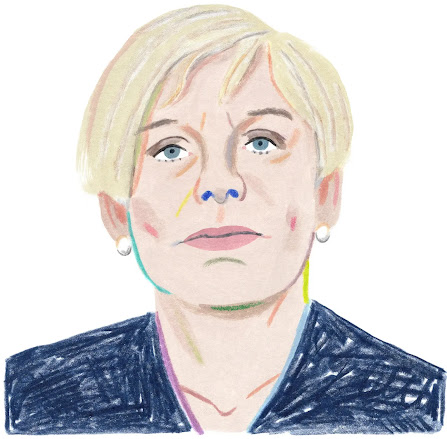 That is Karen Armstrong, pictured above. The image was captured from the online version of the "By The Book" column in the Sunday, September 11, 2022, edition of The New York Times Book Review.
Armstrong is a former Roman Catholic religious sister. She went from a conservative to a more liberal and mystical Christian faith. She attended St Anne's College, Oxford, while in the convent, and majored in English, but she left the convent in 1969. Armstrong's work focuses on commonalities of the major religions, such as the importance of compassion and the Golden Rule.
In that "By The Book" column, Armstrong names The Dawn of Everything, by David Graeber and David Wengrow, as the "last great book" that she has read. Her own, recent book is titled, Sacred Nature, which was published on September 6, 2022. When I first became aware of The Dawn of Everything, I named it as a book I clearly had to read. I think Sacred Nature is probably another one of those books. Here is what Penguin Random House says about the book in the publisher's online promotional notes:

Since the beginning of time, humankind has looked upon nature and seen the divine. In the writings of the great thinkers across religions, the natural world inspires everything from fear, to awe, to tranquil contemplation; God, or however one defined the sublime, was present in everything. Yet today, even as we admire a tree or take in a striking landscape, we rarely see nature as sacred.

In this short but deeply powerful book, the best-selling historian of religion Karen Armstrong re-sacralizes nature for modern times. Drawing on her vast knowledge of the world’s religious traditions, she vividly describes nature’s central place in spirituality across the centuries. In bringing this age-old wisdom to life, Armstrong shows modern readers how to rediscover nature’s potency and form a connection to something greater than ourselves.

Citing to a review in The Guardian, the publishers claim that "Armstrong’s book is [an] urgent message ... that hearts and minds need to change if we are to once more learn to revere our beautiful and fragile planet.”
Those who regularly read my blog postings may have noticed that my thinking, as reflected in these daily notations, has more and more moved from a discussion of "politics," simply understood, to a suggestion that our "politics" must be understood - and practiced - within a spiritual framework. This is, in fact, nothing new. It simply reflects that "Two Worlds Hypothesis," which is pretty much the basis for everything I have written, and continue to write. A long-ago blog posting, published on the first day of 2017, outlines the entire history of my blog, and makes plain the connection between the "Political World" and my "Two Worlds Hypothesis."
In short, if we don't understand that the world we most immediately inhabit - what I call "The Political World" - is ultimately dependent on the "World of Nature," or "The World That God Made," then we will perish, along with all our works.
Of course, "understanding" that truth is only step one. We need to do more than "understand" where we really are. We need to act accordingly, which means a social, political, and economic transformation which will almost certainly happen only if stimulated and accompanied by what amounts to a profound spiritual change, a "metanoia." Without that, hard as it may be to believe, everything that we have constructed, our entire global civilization, can disappear as though it never was.
This, too, is not a new thought, among my various blog postings. Jerry Mander's book, In The Absence of the Sacred continues to be recommended reading. Still, I think Sacred Nature, by Karen Armstrong, has got to be on my book list now!
Maybe on yours, too!
To Subscribe Just Click This Link
Image Credit:
https://www.nytimes.com/2022/09/08/books/review/karen-armstrong-by-the-book-interview.html