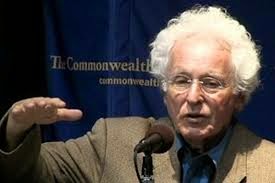 Jerry Mander (pictured) is an American activist and author, perhaps best known for his 1977 book, Four Arguments for the Elimination of Television. Mander's most recent book is called The Capitalism Papers: Fatal Flaws of an Obsolete System. He focuses in that book on various environmental and social problems that he associates with capitalism, and it is fair to say that he is a critic of our current social and economic reality.

Last Thursday, Mander was was scheduled to speak at the UCSC Kresge Town Hall, and I went up to campus to hear him. To my dismay, I missed Mander! He had cancelled at the last moment, and I had failed to read an advance advisory, alerting me to the fact that his appearance had been cancelled. Reportedly, he will be rescheduling that campus visit soon.

Mander’s talk was going to be based on a conference he recently hosted in New York, titled ”Techno-Utopianism and The Fate of The Earth.” He planned to contrast efforts to build a “Techno-Utopia” with an opposing, nature based approach, as illuminated in Ecotopia, the novel by Ernest Callenbach. Thinking about "Utopia" is where my intellectual life began, during a special Honors Program in Social Thought and Institutions, at Stanford University. I hated to miss Mander, speaking about utopia.

Despite my disappointment, I did hear from a friend about one of Mander's books that I knew nothing about, which is maybe some compensation. My friend says it is great. Now I have a new book on my reading list: In The Absence of the Sacred, by Jerry Mander. Here is a brief review:

In his critically acclaimed Four Arguments for the Elimination of Television, author and social critic Jerry Mander proclaimed that television, by its fundamental nature, is dangerous—to personal health and sanity, to the environment, and to the democratic process. With In the Absence of the Sacred, he goes beyond television to critique our technological society as a whole.

In this provocative work, Mander challenges the utopian promise of technological society and tracks its devastating impact on native cultures worldwide. The Western world’s loss of a sense of the sacred in the natural world, he says, has led us toward global environmental disaster and social disorder—and worse lies ahead. Yet models for restoring our relationship with the Earth exist in the cultures of native peoples, whose values and skills have enabled them to survive centuries of invasion and exploitation.

Far from creating paradise on Earth, technology has instead produced an unsustainable contest for resources. Mander surveys the major technologies shaping the “new world order”—computers, telecommunications, space exploration, genetic engineering, robotics, and the corporation itself—and warns that they are merging into a global mega-technology, with dire environmental and political results.


In The Absence of the Sacred sounds like something I could have written myself, at least if that mini-review is on target. Don't I wish!

Those who can't write, read.