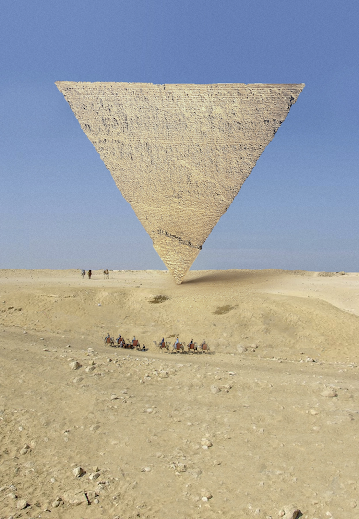 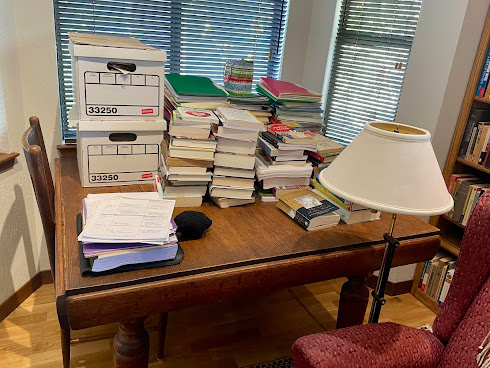 Still, some of the suggestions my friend sends me are pretty good. The books suggested can turn your view of the world upside down - as the illustration at the top of today's blog posting implies. That illustration, incidentally, comes from a book review in The Atlantic, "Human History Gets a Rewrite." The book reviewed, by David Graeber and David Wengrow, is titled, The Dawn of Everything: A New History of Humanity.
Not everyone, probably, will be able to read the entire article published in The Atlantic, given The Atlantic's paywall policy; therefore, for those not able to penetrate the paywall, here is a condensed version of what The Atlantic's reviewer, William Deresiewicz, has to say about this new book:

The Dawn of Everything is written against the conventional account of human social history as first developed by Hobbes and Rousseau; elaborated by subsequent thinkers; popularized today by the likes of Jared Diamond, Yuval Noah Harari, and Steven Pinker; and accepted more or less universally. The story goes like this. Once upon a time, human beings lived in small, egalitarian bands of hunter-gatherers (the so-called state of nature). Then came the invention of agriculture, which led to surplus production and thus to population growth as well as private property. Bands swelled to tribes, and increasing scale required increasing organization: stratification, specialization; chiefs, warriors, holy men.

Eventually, cities emerged, and with them, civilization—literacy, philosophy, astronomy; hierarchies of wealth, status, and power; the first kingdoms and empires. Flash forward a few thousand years, and with science, capitalism, and the Industrial Revolution, we witness the creation of the modern bureaucratic state. The story is linear (the stages are followed in order, with no going back), uniform (they are followed the same way everywhere), progressive (the stages are “stages” in the first place, leading from lower to higher, more primitive to more sophisticated), deterministic (development is driven by technology, not human choice), and teleological (the process culminates in us).

It is also, according to Graeber and Wengrow, completely wrong. Drawing on a wealth of recent archaeological discoveries that span the globe, as well as deep reading in often neglected historical sources (their bibliography runs to 63 pages), the two dismantle not only every element of the received account but also the assumptions that it rests on. Yes, we’ve had bands, tribes, cities, and states; agriculture, inequality, and bureaucracy, but what each of these were, how they developed, and how we got from one to the next—all this and more, the authors comprehensively rewrite. More important, they demolish the idea that human beings are passive objects of material forces, moving helplessly along a technological conveyor belt that takes us from the Serengeti to the DMV. We’ve had choices, they show, and we’ve made them. Graeber and Wengrow offer a history of the past 30,000 years that is not only wildly different from anything we’re used to, but also far more interesting: textured, surprising, paradoxical, inspiring.

Graeber, who died about a year ago from necrotizing pancreatitis, was a friend of the book reviewer, and Deresiewicz calls him a "genius."

Not an extremely intelligent person—a genius. There’s a qualitative difference. The individual across the table seemed to belong to a different order of being from me, like a visitor from a higher dimension. I had never experienced anything like it before. I quickly went from trying to keep up with him, to hanging on for dear life, to simply sitting there in wonder.

Graeber is credited with originating the slogan, "We are the 99%." That slogan, coming out of the Occupy Movement, was a hopeful one, and it seems to me, as I am reading The Atlantic book review, that the message that Graeber and Wengrow are presenting to us is also hopeful. As Deresiewicz says right at the end of his review: "The Dawn of Everything is ... a brief for possibility, which was, for Graeber, perhaps the highest value of all."
It could be that I am being a little too hopeful about the message that The Dawn of Everything delivers. Here are the final paragraphs of The Atlantic review:

The book is something of a glorious mess, full of fascinating digressions, open questions, and missing pieces. It aims to replace the dominant grand narrative of history not with another of its own devising, but with the outline of a picture, only just becoming visible, of a human past replete with political experiment and creativity.

“How did we get stuck?” the authors ask—stuck, that is, in a world of “war, greed, exploitation [and] systematic indifference to others’ suffering”? It’s a pretty good question. “If something did go terribly wrong in human history,” they write, “then perhaps it began to go wrong precisely when people started losing that freedom to imagine and enact other forms of social existence.” It isn’t clear to me how many possibilities are left us now, in a world of polities whose populations number in the tens or hundreds of millions. But stuck we certainly are.