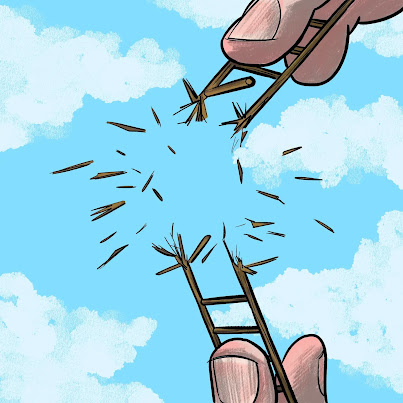 Today, the United States Supreme Court is going to hear arguments that challenge affirmative action programs in higher education. You can read all about it in SCOTUSblog, by clicking right here. As the SCOTUSblog article tells us:

In 2003, the Supreme Court ruled in Grutter v. Bollinger that universities may consider race in their admissions processes as part of their efforts to achieve diversity on campus. On Oct. 31, the justices will hear oral arguments in a pair of cases asking them to overturn Grutter and outlaw race-based affirmative action in higher education altogether.

Linda Greenhouse, writing in yesterday's edition of The New York Times, highlights what she calls "a surprising argument against affirmative action." That quote is the headline to her opinion column, as her column appeared in the hard copy edition of the newspaper. Online, when you click that link, you'll find a different headline, but the text is all the same.
In brief, what Greenhouse finds "surprising" is that those attacking affirmative action are doing so in the name of Brown v. Board of Education, the 1952 case that overruled Plessy v. Ferguson.
Plessy v. Ferguson was decided in 1896, and legitimated racial discrimination (specifically with reference to railway transportation) by holding that accommodations that were "separate but equal" do not violate the 14th Amendment. Fifty-six years after that decision, the Earl Warren Court repudiated the whole notion of "separate but equal." Most people believed that the decision in Brown v. Board of Education represented a major advance in our nation's ability to repair the damage done to Black Americans, who were first held as slaves, and then actively discriminated against in almost every way possible in the post-Reconstruction Era, including by way of the Supreme Court's justification of the "separate but equal" doctrine.
"Separate" is, by definition, not "equal." That is what the Supreme Court said in Brown v. Board of Education, and the 14th Amendment bars governmental actions that deny anyone the "equal protection" of the law.
Those attacking affirmative action are requesting that the Supreme Court, tomorrow, terminate the whole idea of "affirmative action," and overturn Grutter v. Bollinger on the basis that "because Brown is our law, Grutter cannot be." This is the "surprising" argument that Greenhouse highlights. The Supreme Court case most clearly stating that racial discrimination is unconstitutional, because the 14th Amendment demands "equal protection of the laws," is cited as the reason to overturn a Supreme Court case that specifically approved affirmative action as a remedy for racial discrimination.
We have already learned that a majority of the current members of the Supreme Court do not believe that the Court's own longstanding precedents should impose any constraint on what the Court now chooses to do. We learned this to our shock and surprise when the Supreme Court recently overturned its nearly fifty year old precedent in Roe v. Wade, finding that the clear statement in Roe v. Wade, that a woman has a constitutional right to choose whether or not to have an abortion, actually means nothing. All that counts is what five members of the Court now choose to do.
Clearly, the Grutter precedent will carry little weight for Justices who actually think that Supreme Court precedents are entitled to no deference from the Court that established them.
The "surprise" that Greenhouse talks about is that the Court could actually find that the Brown v. Board of Education precedent, demanding "equal" treatment of Black passengers on a train, could morph into a demand that rich white prospective students have an "equal" right to enter Harvard, so that programs that implement an affirmative action program designed to achieve racial diversity on campus violate that "equality" principle.
I haven't read any of the nearly 100 amicus curiae briefs filed in the two cases coming before the Court today, but I wonder if any of them made the point that I think is most persuasive:

We live in a country that has, for most of its existence, brutally discriminated against persons of color, and especially Black people. A law that mandates an "affirmative" program aimed at rectifying these past practices, providing a ladder of opportunity for those who have been discriminated against in the past, is - in my view - absolutely consistent with a constitutional mandate that all persons must receive equal protection of the laws.
To provide equal "protection" of the laws to all, we must recognize the differences that have, both historically and contemporaneously, denied such protection (and participation in our society) to racial minorities.
Today, we can hope that the Supreme Court will not perpetuate a practice of denying its own precedents, to achieve political objectives that a Court majority (unfortunately) may value more than their judicial integrity.
To Subscribe Just Click This Link
Image Credit:
https://www.nytimes.com/2022/10/28/opinion/affirmative-action-supreme-court.html