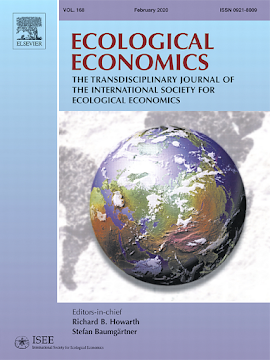 On July 25th of this year, I wrote a brief review of a paper published in Ecological Economics, a journal which says that its mission is to be "concerned with extending and integrating the understanding of the interfaces and interplay between 'nature's household' (ecosystems) and 'humanity's household' (the economy)." That sounds a lot like my "Two Worlds Hypothesis," the way I am reading it.
At any rate, as I confessed in that earlier blog posting, I had a little trouble getting my head around what N.J. Hagens was really saying. His paper is titled, "Economics for the future – Beyond the Superorganism." Since my first reading, I have given Hagens' paper another try, and I continue to recommend it to anyone who is concerned about the future of life on our planet, and about what Ecological Economics calls "humanity's household," namely the human world that we most immediately inhabit.
As you can probably guess, the "Superorganism," as described by Hagens, is not our friend. Now having read his paper several times, I think I can present his argument in a way that will allow a reader of this blog posting to understand the nature of that "Superorganism." Here is my best shot:
At this point in his paper, Hagens turns his attention to human behavior, and makes the following points:
Hagens' paper, in other words, echoes that famous Pogo cartoon. WE are the "Superorganism," and WE are the problem:

The main problem, Hagens says, is that we (as the Superorganism) continue to pursue an infinite growth model on a finite planet. Since "energy" is the basis of everything, we are in deep trouble, because we are "drawing down our carbon battery ten million times faster than it was charged." Debt is a claim on future energy, and as we accumulate debt, we are transferring consumption from the future into the present; what is worse, debt is actually "fake energy," since when the future arrives, the energy is not going to be there to offset the consumption that has already occurred. Hagens puts it this way: "We can print money, but we can't print energy."
Is there a solution? Not as long as we retain growth as an imperative. "The only genuine solutions to overshoot and carbon emissions will include economic contraction, not growth." The idea of a "Green New Deal" that will produce more is doomed to failure. "We will have to change economic systems before we can meaningfully decarbonize the economy. Using renewables is "adding energy, not replacing hydrocarbons....Renewables will continue to scale, but only as part of a larger energy dissipating, CO2 emitting structure."
METANOIA
Hagens doesn't use the word "metanoia." That's my word. It translates as "a spiritual conversion." You can click on the link if you would like to read the definition yourself. It's the only solution that makes sense, once you understand Hagens' analysis.
Here's how Hagens outlines it, citing to Joanna Macy:

There is science now to construct the story of the journey we have made on this Earth, the story that connects us with all beings. Right now we need to remember that story — to harvest it and taste it. For we are in a hard time. And it is knowledge of the bigger story that is going to carry us through. Joanna Macy

A bunch of mildly clever, highly social apes broke into a cookie jar of fossil energy and have been throwing a party for the past 150 years. The conditions at the party are incompatible with the biophysical realities of the planet. The party is about over and when morning comes, radical changes to our way of living will be imposed. Some of the apes must sober up (before morning) and create a plan that the rest of the party-goers will agree to (emphasis added).