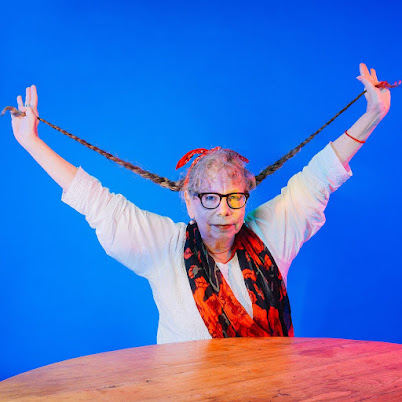 Lynda Barry, whose picture, above, came from The New York Times Magazine, is more than a cartoonist, though that is how I, as a longtime New Yorker subscriber, inevitably think of her. As revealed in a conversation with David Marchese, Barry has written acclaimed plays and novels, and holds down a faculty position at the University of Wisconsin, Madison, where she does "cross-disciplinary teaching on creativity."
The Barry-Marchese interview (one of Marchese's "Talk" columns in The New York Times) is definitely worth reading. You may, though, be frustrated if you click on this link and then can't penetrate the paywall that is likely to be deployed against non-subscribers. To provide at least some modicum of paywall relief, here is an extract from the column, containing a comment by Barry that I found significant (though that may only be because I am currently teaching a course called, "Privacy, Technology, And Freedom" at the University of California, Santa Cruz).
The impact that modern technologies have had on our society, economy, and politics is one of the central concerns of the course. Here is Barry's comment on that topic, with my highlight of what I think of as a critically important insight:

[Marchese] For a lot of people, being creative and making things can be a helpful way to deal with uncertainty, and college students today have to deal with so much uncertainty. Not just about where their lives might go after they finish school but also about things like the future of our politics and our planet. How do you see responding?

[Barry] I know what you’re talking about. These kids are also feeling that every choice should have some utility, and everybody’s freaked out about how they’re going to make a living. Plus, they have $60,000 in debt. How does someone get out from under that? But here’s the big difference I’ve seen over the last few years in the people I work with: They don’t have a big relationship to their hands. I’ve had to show them how to cut a circle out of paper. Barry demonstrated her technique, which is to hold the scissors in place and move the paper in a circular motion. For whatever it’s worth, it was new to me, too.You keep the scissors there and you move the paper like this, and they’re like, “What?!” There’s so much dexterity that they, by and large, do not have.

[Marchese] Is that because of phones?

[Barry] Yeah, and kids start keyboarding in kindergarten. Handwriting, that thing that we think is no big deal, there’s so much dexterity in it. Not just in the hand you’re writing with, but the nondominant hand is always in action, moving the paper, paying attention. I mean, there’s a reason people gesture while they talk. If somebody is trying to explain something complicated, and they have to sit on their hands, it’s much harder for them to explain it. The main thing about the phone is that you’re no longer where you are. You’re no longer in the room. You’re no longer anywhere. The opportunities to have an interaction with the things around you are taken away. I just see the world as richer without the phone. I have a friend who’s a writer. No matter what we’re doing or whom he’s around, he’s on his phone. We were sitting out in a parking lot, and there was a guy who came out who was in this full orc costume with a shield. I thought, I’m not going to say anything. Let’s see if my friend looks up. The guy passed right by him and — it was outside a hotel — tried to get through a revolving door. There’s all this bump ba bump ba bump, and if my friend would have looked up, he would have seen an orc go by! But he never looked up! Then later I told him, and he’s like, “That didn’t happen!” It totally did happen! So something that closes you off to the world that you’re in — I mean, I could be on TikTok all night long. I keep deleting that app because I love it so much. But something that takes you out of your environment, you pay a high price. You miss the orc (emphasis added).

Please consider what Lynda Barry says. When you are looking into your phone, you are "no longer where you are."
We can't have a transformative politics unless we are fully aware and informed of "where we are." We can't "Talk To Strangers" if we are "not in the room."
"Missing the orc" may be one way that our phone use is diminishing our lives.
It is far from the most important! 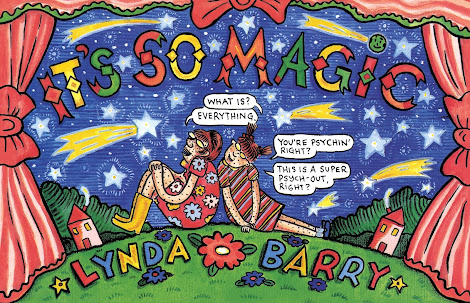