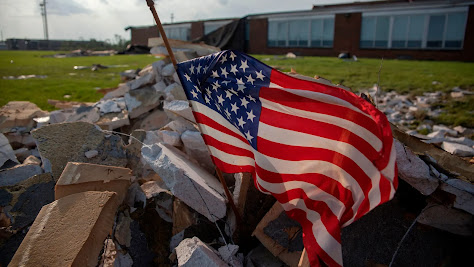 A New York Times article by Reid J. Epstein, published on July 14, 2022 (Bastille Day, for those who still remember the French Revolution), has prompted my blog posting today. Below, I am furnishing the headline that attracted my attention (hard copy version). You can click the link to read the article (paywall permitting).
Losing Faith in Government, Many Americans Say It's Time to Change the System
The image I have used to festoon today's posting, showing the United States flag on a garbage heap, comes not from The Times, but from an opinion editorial published in Teen Vogue, in May 2020, more than two years in advance of The Times' article. That opinion editorial in Teen Vogue, authored by Lucy Diavolo, is headlined, "The Coronavirus Has Shaken What Little Faith I Had Left in Government."

The idea that young people in particular, but also people in general, have "lost faith" in the United States government is not exactly a "news flash." In fact, my own thought is that the 2016 election, in which Donald J. Trump was elected president, indicates, more than anything else, how totally dissatisfied the American people have become with the state of our government. They are so dissatisfied that a majority, in 2016, opted for a clearly unqualified, pompous, erratic, and self-promoting candidate who could be counted on to help "blow it all up." That was seen as a "feature," not a "bug," of the Trump candidacy, and upsetting and reversing all then-current governmental practice was believed to be the way to "Make America Great Again."
Given that Trump did, in fact, do a lot to "blow up" long-accepted governmental practices, the outcome of the 2020 presidential election can be categorized as a kind of "buyer's remorse." I think that there is a good argument that voters selected "good old Joe Biden," instead of doubling down on Trump, because voters more or less figured out that "blowing up the government" wasn't really all that great an idea, when seen in real life. Biden is nothing if not an apologist for the way things have been, historically, and still are, with respect to the federal government.
Biden having now been elected, though, it turns out that we are no more happy with Biden's commitment to past and present governmental practice than we were with Trump's "send the government to hell" approach.
The Times' article, which I will quote below, clearly indicates that President Biden has not been able to dispel our deep-dyed dissatisfaction with our government. Again, this is no "news flash." This has been true for some time, and continues to be how we feel:

A majority of American voters across nearly all demographics and ideologies believe their system of government does not work, with 58 percent of those interviewed for a New York Times/Siena College poll saying that the world’s oldest independent constitutional democracy needs major reforms or a complete overhaul.

Americans’ bipartisan cynicism about government signals a striking philosophical shift: For generations, Democrats campaigned on the idea that government was a force for good, while Republicans sought to limit it. Now, the polling shows, the number of Americans in both parties who believe their government is capable of responding to voters’ concerns has shrunk.

I am not, personally, very upset that voters don't believe that the government is not responding to their concerns. Why not? Because that indicates that voters are totally in touch with reality. It is clear that our government is not responding to voters' concerns (or even reality). For instance:
The above, of course, is only a "partial list."
Because our government is NOT working, it is not disturbing to me that a very significant percentage of the American people understand this. What IS disturbing, though - at least to me - is the intimation that what voters believe needs to change is our "system" of government.
In a past blog posting, I noted the attraction that the "strongman" approach represented by Hungary's Viktor Orbán has for some people. What kind of different "system" would we be talking about here?
Our current system is called "representative democracy," or "democratic self-government." There isn't any different system that would better deal with the problems that plague us, and that have led to the "loss of faith" documented by The New York Times, Teen Vogue, and everyone else who is paying attention.  My blog posting on "What Happened in Croydon" makes the point I'd like to restate right here. There is no reason that our government, as currently constituted, cannot make the kind of progress that the people (and the voters) want.
But... to make progress in a system of "self-government," we need to recognize that the problem is not with "the government." It's with ourselves. If we won't take the time out of our lives to make certain that our "representatives" actually represent us, or get replaced, then the reign of the oligarchy and big money will continue - and can get a lot worse.
Bastille Day - one month ago, today - was, perhaps, a good day for The Times to remind us all that the fate of the nation is not in the hands of "the government." It's in our hands.
Let's take a lesson from the little town of Croydon, New Hampshire, and start making the changes that absolutely must be made. That means changing not "the system," but what our government does in fact. That is the only way we can restore our faith in our government. In the end, we need to trust ourselves. No one else is worthy of our trust.
To Subscribe Just Click This Link
Image Credit:
https://www.teenvogue.com/story/coronavirus-shaken-faith-in-government-op-ed