#193 / Looking For A Sense Of Urgency And Crisis 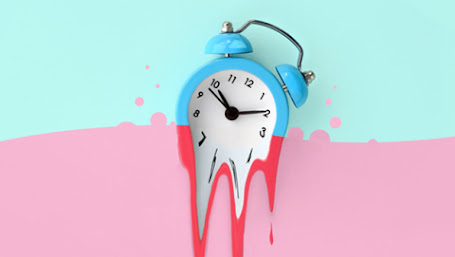 The image above comes from a website touting the value of insights provided by John Kotter, a "leadership guru." Kotter is the Konosuke Matsushita Professor of Leadership, Emeritus, at the Harvard Business School, and is the founder of Kotter International, a management consulting firm based in Seattle and Boston. Kotter's most recent book is titled, Change: How Organizations Achieve Hard-to-Imagine Results Despite Uncertain and Volatile Times. Wikipedia calls Kotter a "thought leader in business, leadership, and change."
Not to mislead you (more than I might already have done so), it is not my intention to talk about Kotter, and his suggestions about how genuine change can be achieved. I just liked that "melting clock" image! It appears that the "business" problems to which Kotter addresses himself are problems for the political establishment, too. Those "political" problems are what I'd like to talk about.
Let me spotlight, specifically, a June 17, 2022, column from The New York Times, authored by Jamelle Bouie. The hard copy version of Bouie's column was titled, "The Democratic Gerontocracy Doesn't Understand That the Nation's on the Brink." Bouie criticizes the Democratic Party, and its aging leaders, for lacking "any sense of urgency and crisis." In Bouie's column, "Exhibit A" is California's own Dianne Feinstein. President Biden gets a nod, too, for being similarly out of touch. Lots of people are thinking that our president is just too old for the job.
I think Bouie's point is well-taken. I am a product of the post-World War II period, and here is a comment from Bouie, quoting historian Jefferson Cowie, that resonates with me:

The Great Depression and World War II may have “forced clear realignments of American politics and class relations,” Cowie writes, “but those changes were less the linear triumph of the welfare state than the product of very specific, and short-lived, historical circumstances.”

If this is true — if the New Deal was the product of highly contingent circumstances unlikely to be repeated either now or in the future — then the challenge for those committed to the notion of a government that protects and expands the collective economic rights of the American people is to forge a new vision for what that might be. “The path forward is not clear,” Cowie writes, “but whatever successful incarnation of a liberal ‘social imaginary’ might follow will not look like the New Deal, and it might be best to free ourselves from the notion that it will (emphasis added).”

The basic contention, here, is that there is no built-in bias for the kind of positive economic, social, and political change that succeeded in pulling the United States out of the Great Depression. That means, to me, that if we are going to prevail in our confrontation with our current crises, which include Global Warming, incipient nuclear war, and massive income inequality, that we shouldn't think we can follow "leaders" that best relate to past realities.
Something new is called for, and our officially-sanctified "leaders" cannot be counted on to show us the way. It's going to be up to us, the ordinary folks, to come up with the transformative changes that are absolutely required.
That "melting clock" image is a good symbol of the crisis of what is most commonly called "Climate Change," which is the end result of the "Global Warming" that is heating up the planet. Think about it. Let the meaning of that image sink in. That "melting clock" image lets us know that we have very little time left to make the changes that need to be made.
To Subscribe Just Click This Link
Image Credit:
https://enterprisersproject.com/article/2019/7/how-create-sense-urgency-from-crisis