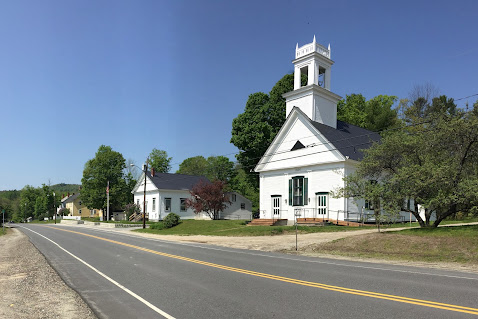 Pictured is Croydon, New Hampshire, population approximately 800. An article that ran in the July 12, 2022, edition of The New York Times discusses some recent events in Croydon, and is titled, "A New Hampshire Town's Lesson in Democracy."
Here's a picture that accompanies The Times' article, online, where the headline on the article is just a little bit different from the hard-copy version: 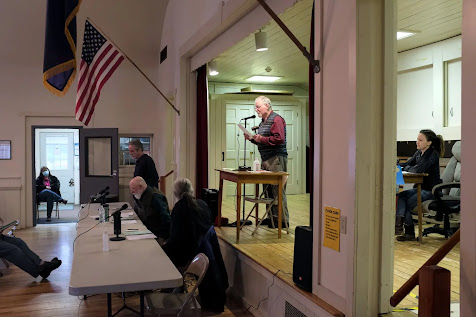 As you might be able to deduce from the picture, democracy in Croydon is of the "direct democracy" kind. Any properly registered voter who is a resident of the town is entitled to show up at the annual Town Meeting, and to speak out, and then to vote on every issue on the agenda. This is a little bit different from what happens in a place like the City of Santa Cruz, California, where a system of "representative" democracy is in effect. Voters in the City of Santa Cruz elect a City Council, and it is those elected representatives who then get to vote on the issues - including, very notably, the city's annual budget.
In Croydon, something unexpected and unusual happened last March, at a Town Meeting called to consider the Town Budget, and then, as a separate item, the School Budget. Below, I will excerpt The Times' article, in which reporter Dan Barry presents the story. Before being able fully to understand what happened, though, you will need to know at least something about the "Free State Project," an organized effort to bring what Californians of my generation might call "right wingers" to New Hampshire, to take over the state politically. The Free State Project, of course, doesn't say it's asking "right wingers" to migrate to New Hampshire. They call them "Liberty Activists."
Here is Dan Barry's account of what happened in Croydon:

On a snowy Saturday this past March, the 2022 meeting began in the two-century-old town hall, where the walls are adorned with an 1876 American flag made by the “women of Croydon” and instructions to reset the furnace to 53 degrees before leaving.

Residents approved the town budget in the morning. Then they turned in the afternoon to the proposed $1.7 million school budget, which covers the colonial-era schoolhouse (kindergarten to fourth grade) and the cost of sending older students to nearby schools of their choice, public or private.

This is when Mr. Underwood, 60, stood up and threw a sucker punch to the body politic.

Calling the proposed budget a “ransom,” he moved to cut it by more than half — to $800,000. He argued that taxes for education had climbed while student achievement had not, and that based in part on the much lower tuition for some local private schools, about $10,000 for each of the town’s 80 or so students was sufficient — though well short of, say, the nearly $18,000 that public schools in nearby Newport charged for pupils from Croydon.

In pamphlets he brought to the meeting, Mr. Underwood asserted that sports, music instruction and other typical school activities were not necessary to participate intelligently in a free government, and that using taxes to pay for them “crosses the boundary between public benefit and private charity.”

The pamphlet did not note that its author was a 1979 graduate of the public high school in Chesterton, Ind., where he starred on the tennis team, ran track, played intramural sports and joined extracurricular activities in math, creative writing, radio and student government. Also: National Honor Society member, National Merit finalist and valedictorian.

One person not completely gobsmacked by Mr. Underwood’s proposal was the school board chairwoman: his wife, Jody Underwood. The Underwoods, who do not have children, moved to Croydon from Pennsylvania in 2007 in part to join the Free State mission; they are now considered a Free State power couple.

Dr. Underwood, 61, a learning scientist with a doctorate in education, said that she had known of her husband’s budget-cut proposal beforehand, but hadn’t felt obliged to give the community a heads-up. “Do Ian and I talk about things? Yes,” she said. “Is that shocking?”

Even so, she said, “I didn’t think it was going to pass.”

In fact, Mr. Underwood’s motion was seconded, sparking a contentious debate that included his wife reading a statement in support of the budget cut — in effect arguing against the $1.7 million budget that she and the rest of the school board had previously recommended. (Dr. Underwood later explained that her husband’s assertions — including that education spending had gone up 30 percent in recent years — had persuaded her.)

Amanda Leslie, 42, a resident who teaches in another district, became so alarmed that she texted her husband to get to town hall right away: “The Free Staters are trying to cut the budget more than in half.”

His vote wouldn’t have mattered. The budget-slashing amendment passed, 20 to 14.

The school clerk, Angi Beaulieu, was so dismayed by what she had just witnessed that instead of signing her account of the minutes with the standard “respectfully submitted,” she wrote, “Regretfully submitted.”

The shocking budget cut meant that the school board suddenly had to craft a new financial plan, while many parents suddenly had to come up with thousands of dollars to keep their children in public schools.

“I would have to put in an extra thousand hours of work a year,” said Ed Spiker, 38, a painting contractor whose two sons attend Newport public schools.

Mr. Underwood did not respond to requests for comment. But in the weeks after the meeting, he and his wife made separate appearances on an online Free State program to discuss what Free Staters were claiming as a victory for their cause.

So, that is what happened at the Croydon, New Hampshire Town Meeting last March. There was a successful stealth attack on public education, carried out by a political group that is trying to change the politics of the state in a "conservative" direction. With 34 eligible voters in attendance, the Town voted 20 to 14 for a radical reduction in education funding that had never been proposed or discussed in advance.
But that is not the only thing that happened in Croydon. What happened next is really the reason for telling this story:

Many Croydon residents were livid.

But they were also chastened. They hadn’t attended the town meeting. They hadn’t fulfilled their democratic obligation. They hadn’t kept informed about the Free State movement. To some observers, they had gotten what they deserved.

“I was practically kicking myself in the ass for not being there,” Mr. Spiker said. “I guess I assumed our town would take care of it.”

The moment revealed a democracy mired in indifference. Turnout at town meetings has been low for years. The town’s websites are barely rudimentary, with school board minutes posted online sporadically. The select board’s minutes are found at the town hall — open three afternoons a week — or the general store, beside chocolate bars being sold to benefit the local humane society.

From this muddle of anger, confusion and regret, though, a movement was born. It came to be known as We Stand Up for Croydon Students.

Conservatives, liberals and those who shun labels — “an entirely nonpartisan group,” said Ms. Damon, one of the members — began meeting online and in living rooms to undo what they considered a devastating mistake. They researched right-to-know laws, sought advice from nonprofits and contacted the state attorney general’s office to see whether they had any legal options.

They did: Under New Hampshire law, citizens could petition for a special meeting where the budget cut could be overturned — if at least half the town’s voters were present and cast ballots.

Ms. Beaulieu, 44, a project manager for a kitchen and bath store, helped to gather enough signatures for the necessary petition. Once a date in May was set for the special meeting, she and other volunteers spread the word, knocking on doors, conducting phone banks and planting lawn signs.

Meanwhile, the three-member school board developed a plan to fit within its shrunken budget. It would mean that more than half the jobs in the town’s tiny school system would be either lost or outsourced.

The crisis in Croydon generated a curious democratic dynamic. Since the law required that at least half the town’s electorate participate in the special meeting’s vote for it to be binding, those trying to overturn the Underwood budget encouraged people to attend, while those hoping to retain it encouraged people to do just the opposite and stay home.

On the chilly Saturday morning of May 7, Croydon residents filed into a spacious building at the local YMCA camp for their special meeting. The We Stand Up contingent needed at least 283 voters.

The vote in favor of overturning the Underwood budget: 377.

The We Stand Up crowd cheered and hugged, leaving Mr. Underwood to vent online with posts titled “Your House Is My A.T.M.” and “Possibly Dumbest Thing I’ve Heard Someone Say, Ever,” and Dr. Underwood to frame the moment as both an impressive voter turnout and a victory for “mob rule.”

“It felt to me like a bunch of woke people came to Croydon,” she said.

Croydon’s experience resonated well beyond its borders, receiving substantial regional news coverage. It became a cautionary tale for these times — or, perhaps, a reflection of them.

“As citizens we have many rights, but we also have obligations,” said Wayne Lesperance, a political science professor at New England College, in Henniker, N.H. “And when we don’t fulfill our obligations, we often end up with results we don’t like.”

It seems that many in Croydon have come to feel that obligation.

Ms. Leslie, the teacher, is working on the political campaigns of her We Stand Up colleagues. She said she is fueled by a desire to oust from public office anyone associated with the Free State movement.

Mr. Spiker, the painting contractor, spent a few hundred dollars on a camera and a microphone. Now he records and posts the school board and select board meetings online.

The "moral" of this story is obvious. If we want to have a government that truly respects and reflects our values and desires, and that implements our priorities, we absolutely must get involved ourselves. There isn't any shortcut.
This principle, so clearly illuminated by what happened in Croydon, applies everywhere - and even where we exercise our democratic control over government by electing "representatives" who are supposed to do what we would do ourselves, were we to vote directly.
If we care, we can make our system of self-government work - but not if our democracy is "mired in indifference," not if we have drifted into complacency.
What happened in Croydon makes this crystal clear, and it is, as the news article said, a "cautionary tale."
But what happened in Croydon is an inspiration, as well. "We Stand Up for Croydon" shows how a small town can stand up for itself, and for democracy. Let's not forget the basic lesson we have learned from what happened in Croydon:

We can only have a truly democratic self-government if we get involved ourselves.