I have to confess that I was pretty offended after reading a recent column in Cal Matters, an online political newspaper that has what I would consider to be a generally "conservative" bent.
A Cal Matters "guest commentary" by Ethan Elkind, entitled, "Joshua tree protection could slow state’s progress on climate goals," suggests that California needs to "pave the desert" with solar energy facilities, to stave off global warming, and that this needs to be the state's first and highest priority. Efforts to protect and preserve those damn Joshua Trees are really getting in the way of this beneficial effort, according to Elkind.
How ironic, I thought, as I read the article, since global warming is one of the main reasons that the Western Joshua Tree is in danger of extinction. "Developers," of course, are also highly implicated in the adverse conditions affecting the future of the Western Joshua Tree, as those developers cut the trees down in connection with new subdivisions and other projects. Still, the Elkind analysis reminded me of that "we need to destroy the village in order to save it" approach that worked out so well in Vietnam!
Elkind's main thesis is that it is essential to maximize new solar energy development, and he posits that we need lots of desert land for solar collectors - land where sun is abundant and there aren't any competing human uses. This is, by the way, a position that is endorsed by the big public utilities - those massive private corporations that do that kind of thing. According to Elkind, we need to eliminate any constraints on big energy corporations that might be related to allowing endangered species to survive. Proposed efforts to save the Western Joshua Tree are "excessive," the way Elkind sees it. He doesn't think that the trees are that threatened, anyway.
Elkind is an attorney who directs the climate program at the Center for Law, Energy and the Environment at UC Berkeley Law, and I have made favorable mention of him before. The job he holds undoubtedly helps explains his willingness to sacrifice endangered species for more solar energy facilities. I'd like to think, though, that Elkind's employer might insist that all the words in the Center's name have equal dignity, and that "Energy" isn't any more important than "the Environment," even though "Energy" is listed first.
Is there a way to combat global warming without sacrificing desert species? I think there probably is, but the first essential step is to make a commitment to protecting the endangered species. Then, having established that we are going to protect endangered species, we need to formulate our plans with that constraint in mind.
I think we can do it. Two things strike me.
First, the Elkind-endorsed approach takes for granted that we need to build extensive new energy production facilities (solar, of course) to replace the energy now produced by fossil fuel combustion. To some degree, it is obviously true that we do need new energy production facilities that will produce energy from non-fossil fuel sources. But what Amory Lovins of the Rocky Mountain Institute used to call "nega-Watts" is another way of getting to where we need to go. Energy "conservation," in other words, is an alternative (and non-impactful) way to "produce" the energy we need, as we eliminate current fossil fuel generating plants. Before we start paving over the desert with facilities that look like the ones pictured below, let's put a vigorous energy conservation program in place that will allow us to save desert habitat by by maximizing conservation. We're not doing nearly enough on that front. 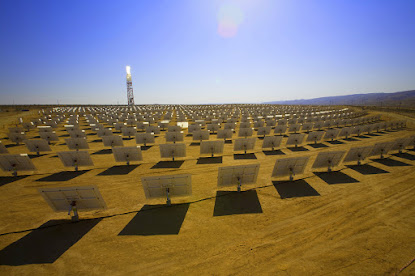 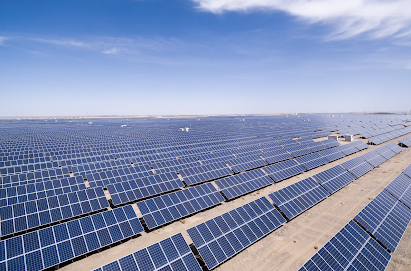 Second, if we need to increase new solar energy production, let's start by installing those new solar energy facilities on already-existing structures, and on infill sites - not on endangered desert habitats. I have already written about efforts along those lines, and as Bill Powers demonstrates, in an article in the Sierra Club's Desert Report, there is a lot more we can do: 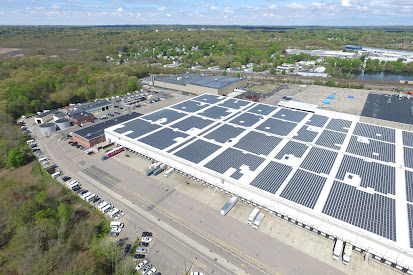 Only when we have done the two things I suggest above should we contemplate bulldozing our sensitive desert habitats. We haven't maximized conservation, and we have not utilized already developed properties as the location for new solar energy generating facilities. Elkind's brief article doesn't even attempt to convince readers that we have done those things. He jumps immediately to the "easy thing," proposing to take some non-developed land, and put new development all over it. Isn't that the way it always seems to go, as Joni Mitchell's song about that "Big Yellow Taxi" reminds us? And isn't Mitchell right, too, as she continues to tell us, "you don't know what you got till it's gone."
Wipe out what's there and put up something new! That is how "development" has been done, from time immemorial. That is not what a Center for Energy AND The Environment should be advocating.
I confess, I got irritated when I read that Cal Matters article. I confess that I am getting tired of hearing arguments that more environmental destruction is the way to cure the problems of the environmental destruction that we are already causing by our failure to respect the limitations of the Natural World. Our past efforts - often so well-intentioned - are putting hundreds of thousands of species in danger of extinction.
The Western Joshua Tree is on that list. We are, too - make no mistake. So, let's have a little fellow feeling for the Joshua Trees! Their fate, and our, are intertwined.
To Subscribe Just Click This Link
Image Credits:
(1) - https://calmatters.org/commentary/2022/06/joshua-tree-protection-could-slow-states-progress-on-climate-goals/
(2) - https://green.googleblog.com/2011/04/investing-in-worlds-largest-solar-power_11.html
(3) - https://www.fool.com/investing/2019/09/22/where-solar-energy-is-booming-in-the-us.aspx
(4) -  https://www.wsj.com/articles/altus-power-secures-600-million-solar-panel-partnership-11648551601