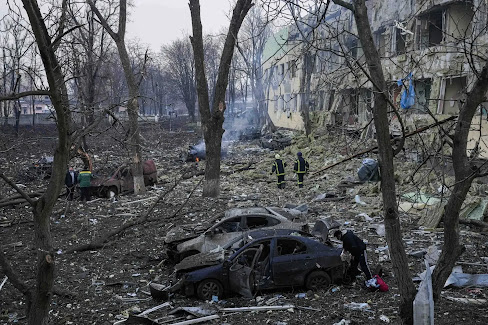 In an article in the Saturday, March 19, 2022, New York Times, Max Fisher bemoans the "ruthless pragmatism" of the Russian bombing of Ukraine. The picture above, from the online version of the article, shows a maternity hospital damaged by shelling in Mariupol last week. Anyone who has been reading the newspapers, or who has otherwise been paying attention, has seen lots of similar pictures.
By recent accounts, the "invasion" of Ukraine is apparently being rather successfully opposed by the Ukrainians; in fact, it might truly have "stalled out." Thus, the invasion has been replaced by the wholesale destruction of non-military targets, like homes, hospitals, and museums. Here is how Fisher describes it:

As Russian artillery and rockets land on Ukrainian hospitals and apartment blocks, devastating residential districts with no military value, the world is watching with horror what is, for Russia, an increasingly standard practice.

Its forces conducted similar attacks in Syria, bombing hospitals and other civilian structures as part of Russia’s intervention to prop up that country’s government.

Moscow went even further in Chechnya, a border region that had sought independence in the Soviet Union’s 1991 breakup. During two formative wars there, Russia’s artillery and air forces turned city blocks to rubble and its ground troops massacred civilians in what was widely seen as a deliberate campaign to terrorize the population into submission.

Now, Vladimir V. Putin, whose rise to Russia’s presidency paralleled and was in some ways cemented by the Chechen wars, appears to be deploying a similar playbook in Ukraine, albeit so far only by increments.

This is all quite accurate, but I do have a complaint. The article gives the impression that this kind of horrific "pragmatism" is, somehow, a Russian invention. Nothing could be further from the truth, and we should be giving credit where credit is due:
As these pictures convincingly demonstrate, it has been the United States of America that has pioneered the bombing of non-military targets. In fact, as the History News Network has pointed out, it was United States Air Force General Curtis LeMay who is credited with coining the phrase that now best describes modern military strategy: "Bombing them back into the Stone Age."
According to that article, LeMay, who "incinerated two thirds of Japan’s cities in World War II ... was disappointed when Kennedy wouldn’t let him do the same to Cuba. In his 1968 memoir, [LeMay] suggested that rather than negotiating with Hanoi, the United States should 'bomb them back to the stone age,' by taking out factories, harbors, and bridges 'until we have destroyed every work of man in North Vietnam.'”
As it turns out, according to the History News Network, LeMay apparently cribbed his famous phrase from a June 1967 column by humorist Art Buchwald, who used it to caricature the Goldwater Republican attitude toward Vietnam. Whoever coined the phrase, though, it is now the prevailing way we think about "war." In terms of military strategy (and military reality) here are no longer any "battlefields," physical locations where contending military forces have a "fight," to determine which side wins a point of contention. There is only the wholesale destruction of everything that makes modern life possible. War and the continuance of human civilization are completely contradictory, and the ultimate outcome, of course, will be the eventual use of atomic bombs, to bring back the Stone Age everywhere.
I know that's on everybody's mind!
To me, looking for the "lemonade" in the current war in Ukraine, perhaps we should see what is happening in Ukraine as an opportunity for the United States to come up with a new strategy for conflict resolution. Sound like a good idea? Seems good to me. In fact, that seems to be the only idea that is worth having, right about now.
Until we do come up with a new strategy, and start spending our billions on implementing that strategy, let's not blame "the Russians" for using the old and outmoded strategy that we developed, and that the United States has pioneered and perfected, worldwide.
Image Credits:
(1) - https://www.nytimes.com/2022/03/18/world/europe/russia-military-strategy-bombing-cities.html
(2) -  https://www.bbc.com/news/world-europe-51448486
(3) - https://time.com/4346336/atomic-bombs-1945-history/
(4) - https://www.flickr.com/photos/13476480@N07/31432791771
(5) - https://socialistworker.org/2018/03/20/the-us-war-machine-unleashed-in-iraq
To Subscribe Just Click This Link