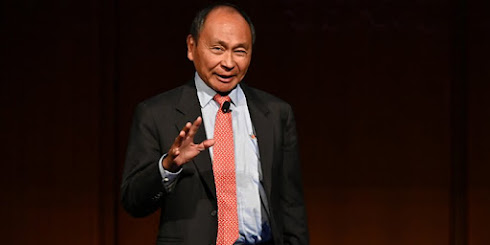 The picture of Francis Fukuyama, above, comes from an article retrieved from a Stanford University website. The article, dated December 12, 2019, is titled, "Francis Fukuyama on Why We Should All Be Paying Attention to Ukraine." Given the date, and the title, it seems like Fukuyama may have been on to something.
Fukuyama, for those coming late to the show, is the guy best known for his suggestion, made in 1992, that we have reached the "end of history." As recent events in Ukraine testify, it doesn't seem like that prediction was actually on target. History still keeps happening! An article in the May 11, 2022, edition of The New York Times, "After History's End, Still Plugging Along," gives us Fukuyama's latest thinking. Without saying so, explicitly, Fukuyama does appear to concede the extreme prematurity of his 1992 pronouncement.
Because I am in favor of the continuation of history, and particularly because I believe that every human being is capable, always, in any circumstance, of doing something new and unexpected, and making history, I have not, really, been much of a Frances Fukuyama fan. This is not to say that I haven't paid attention to him, and to his "end of history" claim. As I searched my archives, I found lots of blog postings dealing with Fukuyama's proposition:
The recent New York Times' article, which was stimulated by a new book from Fukuyama, Liberalism and Its Discontents,  provides me with yet another occasion to comment on Fukuyama and his theories. Here is the specific observation in The Times' article that prompts this latest blog posting:

In his new book, released on Tuesday by Farrar, Straus and Giroux, Fukuyama argues that liberalism is threatened not by a rival ideology, but by “absolutized” versions of its own principles. On the right, the promoters of neoliberal economics have turned the ideal of individual autonomy and the free market into a religion, warping the economy and leading to dangerous systemic instability. And on the left, he argues, progressives have abandoned individual autonomy and free speech in favor of claims of group rights that threaten national cohesion (emphasis added).

I think that Fukuyama is correct in his understanding that both "individual autonomy" and "group rights" are essential components of a democratic society. We are both individuals and we are "together in this life," and we shouldn't forget either one of those truths. We need to build our society on both of them.
As we act individually, and together, there is a lot of history still to be written, a lot of things for us still to accomplish. As The Wilburys put it, in "End Of The Line," which I consider to be a truly great song, we still have "something to say." There are stories still to be written, stories to be told.
So, what will the end of our story be? Which way will that "arc of history" be bent?
It could go either way, and as Bob Dylan has said (and I think correctly), "I guess it must be up to me!'
In other words, Fukuyama is right about that "personal autonomy" thing.
To Subscribe Just Click This Link
Image Credit:
https://fsi.stanford.edu/news/francis-fukuyama-why-we-should-all-be-paying-attention-ukraine