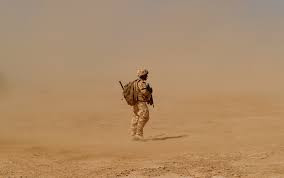 Many of us who deployed to Iraq naively thought we were doing the right thing.... This feeling was so persuasive that it led to many troops feeling that the Iraqis were somehow ungrateful when they started to shoot at us for invading their country (emphasis added).

The above report comes from Andy Owen, a former British soldier who served two tours in Iraq. Owen's observation comes specifically from his article in the online magazine Aeon, "Reading John Gray In War."
Gray is an English political philosopher who has written several influential books, including False Dawn: The Delusions of Global Capitalism (1998) and Straw Dogs: Thoughts on Humans and Other Animals (2003). Here is Owen on Gray:

The myth of progress was a key theme of Gray’s bestseller Straw Dogs.... There he attacks what he believes is the illusory faith that our species is apart and above the rest of nature, uniquely privileged in the Universe with the gifts of self-consciousness and reason. He attacks the idea of "humanity," saying that "there are only humans, driven by conflicting needs and illusions." Due to the plurality of human needs and illusions, it’s utopian to imagine that any one political system or social order could be universally good for all. For Gray, human nature is an inherent obstacle to advancing ethical or political progress. There’s no end of history as was once proclaimed when the Cold War finished and US hegemony was assured. Instead, our ceaseless attempts to try to find some meaning to life invariably drive us into the embrace of religious belief systems and their secular imitations – and, consequently, to continual conflict. Writing in 2020, Gray highlights that, throughout history "killing and dying for nonsensical ideas is how many human beings have made sense of their lives," and notes the irony of attempting immortality through death.

Having killed (and risked death), in the pursuit of what he calls a "utopian" idea, the idea that some kind of fabled and positive "New World Order" would be achieved by the invasion of Iraq, Owen is now aspiring to the wisdom of Blaise Pascal:

"All of humanity’s problems stem from man’s inability to sit quietly in a room alone."

In other words - and I encourage you to read Owen's entire article - Owen is suggesting that we should all be "minding our own business," not trying to bring truth, justice, or the American (or British) way to those ungrateful types who would much prefer that we just leave them alone. In terms of the principles that should guide our foreign policy, the correct policy would be to allow other countries to confront their own problems by themselves and to provide assistance to such countries only when requested. That would, in fact, allow us better to confront our own problems, too!
Owen's thought is quite consistent with what I suggested would be a good idea, in my blog posting on Friday, February 26, 2021. I called that blog posting, "State Of The Empire."
If we would just follow that advice, a lot of people around the world would be really, really grateful.
Image Credit:
https://aeon.co/essays/how-john-grays-philosophy-helped-me-understand-my-war-experience