#213 / The Most Promising Antidote 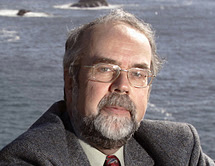 My friend Richard Charter, pictured above, is currently a Senior Fellow at The Ocean Foundation, where he directs its Coastal Coordination Program. In 2011, Richard was honored as a "Hero of the Sea," receiving a Peter Benchley Ocean Award that recognized his years of successful work in protecting our ocean environment.
Richard's work on coastal and marine protection issues began in the mid-1970s. He worked with Santa Cruz County, and with other California coastal communities, fighting proposed offshore oil development, and it was Richard's continuing work against offshore oil, more than any other factor, that maintained a bipartisan 27-year annual renewal of the offshore drilling moratorium that has long protected the U.S. Atlantic and Pacific coasts.
If I had to name the single most important and effective person in the successful effort to establish the Monterey Bay National Marine Sanctuary, I'd name Richard Charter. Richard is currently working to advance a proposed Chumash Heritage National Marine Sanctuary off San Luis Obispo and Santa Barbara Counties.
Richard has also just written a book (an eBook) titled, Only Living Planet. Richard's book is available for a free download. Just click this link to get your copy. Richard calls his book a "true story of how climate change became a crisis and what is possible – and now necessary" to overcome the crisis that confronts us.
The purpose of my blog posting, today, is to encourage readers to click the link and to find out what Richard has to say about global warming, and what we can do about it.
When you read through the book, I think you will get the same impression I got. We are in deep trouble because of our continuing combustion of fossil fuels, but we have the ability, actually, to make a successful transition to a different kind of energy future. Richard's book, in other words, is actually a rather "hopeful" book. Here is what Richard has to say about that:

Hope is the most promising antidote for the emerging institutional paralysis over climate impacts, a social reluctance based on fear and lack of understanding of the science of climate change. The path to a resilient, thriving future remains ours to determine, and transitioning to social patterns that can resolve the current dilemma that we now face lies within reach. We need only to act decisively and with all due caution, with our next steps based on paying close attention to realizing the full potential of our collective journey into the future (emphasis added).

Few would have thought, in 1975, that citizen-based efforts, initiated in Santa Cruz County, California, could succeed in beating the oil companies, nationwide, and in stopping offshore oil development everywhere along our nation's coasts except where it was already underway. And yet, we did succeed in doing that - and in maintaining that offshore drilling moratorium for twenty-seven years, with bipartisan support in the Congress and in both Democratic and Republican administrations.
Let's not give up on the global warming challenge that confronts us. Let's remember what Richard Charter says (and he ought to know):
Hope Is The Most Promising Antidote
To Subscribe Just Click This Link
Image Credit:
https://peterbenchleyoceanawards.org/honorees/2009/richard-charter