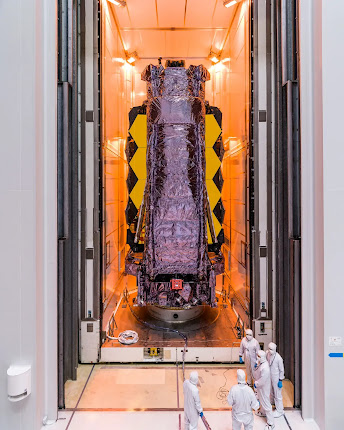 Pictured above is the folded-up James Webb Space Telescope, as it was prepared for mounting on a rocket and for its launch last year at the European spaceport in Kourou, French Guiana. I got the picture from an online version of a New York Times' article, "No Sign of Martians, but Webb Will Keep Looking." The online headline is different, as is so often the case.
The first images we have received, now that the new space telescope is operational, are truly awe-inspiring. You can click the link to view them. What I was mainly interested in, though, in The New York Times article, was this description of what scientists are trying to find, using this new hardware:

This month will mark a new chapter in the search for extraterrestrial life, when the most powerful space telescope yet built will start spying on planets that orbit other stars. Astronomers hope that the James Webb Space Telescope will reveal whether some of those planets harbor atmospheres that might support life.

Identifying an atmosphere in another solar system would be remarkable enough. But there is even a chance — albeit tiny — that one of these atmospheres will offer what is known as a biosignature: a signal of life itself.

“I think we will be able to find planets that we think are interesting — you know, good possibilities for life,” said Megan Mansfield, an astronomer at the University of Arizona. “But we won’t necessarily be able to just identify life immediately.”

So far, NASA has spent $10 billion on the James Webb telescope. I suppose that's not really very much, when we consider that the United States government is spending about $800 billion a year on what is euphemistically called "defense." In an excellent column in the San Jose Mercury News, Lindsay Koshgarian ably demonstrates how we could vastly improve life on Earth, were we to redirect those funds.
Still, $10 billion is a lot of money to be looking for atmospheric signatures indicating life on exoplanets around stars located in other galaxies, thousands of light years away.
Maybe it's just me, but I am kind of seeing some irony, here, as we look for life on planets that are light years away while we happen to be living on the only planet in the entire universe where we know that life exists, and where we are in the middle of a massive extinction event - the "Sixth Extinction" - caused by our own human activities.
Am I off base, here, or are you feeling some irony, too?
To Subscribe Just Click This Link
Image Credits:
(1) - https://www.nytimes.com/2022/07/02/science/webb-telescope-exoplanets-atmosphere.html
(2) - https://www.nasa.gov/feature/amazing-earth-satellite-images-from-2021