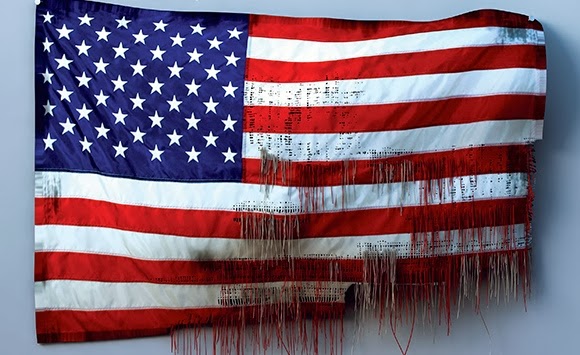 Francis Fukuyama, writing in The American Interest, says that many of our most important political institutions are fraying and decaying. The image above illustrates the article.

Ordinary people feel that their supposedly democratic government no longer reflects their interests but instead caters to those of a variety of shadowy elites.

I certainly can't disagree with Fukuyama's diagnosis. I think he has identified our current situation. But what is his prescription? Fukuyama thinks that the problems with our politics could be solved "if the United States moved to a more unified parliamentary system of government." That's not likely to happen, he admits, and that's where Fukuyama's essay ends.

My own conclusion is different. We don't need to amend the Constitution and move to a parliamentary form of government. The problem isn't one of structure. It's one of participation. It has been convenient for us to forget that we're actually in charge of the government, and that we're the boss! That's understandable. It takes a lot of time and effort to make self-government work. For one thing, we have to get involved ourselves. You can't really "delegate democracy." When you try to do it, you end up with those "shadowy elites."

So, when larger numbers of people start deciding that they are done with delegation (and that actually might start happening, sometime soon), a reenergized and revolutionary movement can put some modern Betsy Ross to work, and we can reweave that tattered flag.