#111 / The Politics Of Inevitability 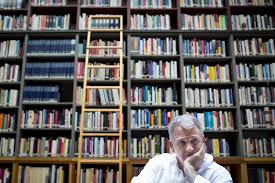 I really like that picture, featured above. I have bookshelves that look almost the same (but not so tall as to demand a ladder, I will admit that).
I found the picture in a brief little communication from The Hannah Arendt Center For Politics and Humanities at Bard College. Each weekend, Roger Berkowitz, the Academic Director of The Hannah Arendt Center, puts out an online publication called Amor Mundi. If you are interested, click the link; you can subscribe for free.
Amor Mundi consists, generally, of short Berkowitz commentaries on various items that are recent, relevant, and significant. Links to the articles being commented on are provided. In the case of the Amor Mundi item with the picture of the bookshelves, Berkowitz was commenting on something he found in The New York Times: "Transcript: Ezra Klein Interviews Timothy Snyder."
Since I subscribe to The Times, I was familiar with Klein, and I have even mentioned him in this blog. Point of interest: Klein was, at one time, an undergraduate student at the University of California, Santa Cruz. About Timothy Snyder, however, I knew nothing. A quick internet search told me that Snyder is a professor of history at Yale University, and the photo that accompanied Snyder's online profile told me that it is Snyder who is pictured, above, with all those books.
Undoubtedly assuming that many readers, like me, wouldn't have heard of Snyder, Klein does introduce him, before Klein gets into his interview:

So Timothy Snyder is a Yale historian. In recent years, he became something of a hero to liberals for a series of books particularly “On Tyranny: 20 Lessons from the 20th Century,” which became something like a Bible for worried liberals early in the Trump era. These are books about what it feels like and what you do when your society is beginning to creep down or trip down the road to authoritarianism. But that perspective for Snyder, those learnings, they don’t come from his immersion in American politics. They come from his immersion in Ukrainian politics and history. Snyder’s core academic subject is Ukraine.

So by the politics of inevitability, I mean the notion that sometimes goes under the heading of progress. I mean the idea that some kind of outside force is going to guarantee that the things that we desire and wish for are actually going to come about. And if that seems abstract, then what I mean in particular with reference to the United States after the end of communism in 1989 is the notion that there are no alternatives left in the world.

To quote Margaret Thatcher or to quote Frances Fukuyama, history is over. And it’s inevitable that a larger force, namely capitalism, is going to bring about the thing that we desire, namely, democracy and freedom. And that idea was in the air. That idea shaped everything else. And I think that idea has a lot to do with the crisis of democracy and freedom that we’re in right now....

What the politics of inevitability does is that it teaches you to narrate in such a way that the facts which seem to trouble the story of progress are disregarded. So in the politics of inevitability, if there is huge wealth inequality as a result of unbridled capitalism, we teach ourselves to say that that’s kind of a necessary cost of this overall progress. We learn this dialectical way of thinking by which what seems to be bad is actually good.

Snyder, in other words, is using the phrase, "the politics of inevitability," to talk about a species of "false consciousness." Nations assume that their idea of what they want to happen "will" happen, and that there is some mechanism that will "bend the arc of history" in exactly the direction that they'd like to see history go. This idea, that a certain political result is "inevitable," does suggest that history is essentially "over," because the traditional idea of history is that there is a story with a past, present, and a future, and that the future cannot be predicted, since it will depend on what people do in the present. History bring you "up to date," but it doesn't determine what happens next. If history and politics were really just a description of an "inevitability," there wouldn't be any need for "history" at all. Such, in fact, was the assertion of Frances Fukuyama, whom Snyder quotes to that effect.
What neither Snyder nor Klein explicitly say in the interview is that it is literally impossible for history ever to be "over," as long as human beings are alive. That is because human beings can always do something unexpected - they can do horrible things, and wonderful things, whatever! Yogi Berra, baseball philosopher, put it plain: "It ain't over till it's over." I guess Frances Fukuyama wasn't a fan.
Besides Yogi Berra, another person who held that "it ain't over till it's over" was Hannah Arendt, a political theorist who based her understanding of politics on "natality," the idea that each new human who is born represents a "new beginning" in the world, and that each one of us has the ability, always, to do something unexpected, something never ever contemplated or done before, and that by doing some unexpected thing, each one of us has the potential to change the world.
That "Arendt connection," of course, is undoubtedly why Roger Berkowitz picked out the Klein-Snyder interview for recognition in the edition of Amor Mundi published on Sunday, March 20, 2022. Berkowitz doesn't really try to refute the idea that a "politics of inevitability" is an oxymoron, a contradiction in terms, but so it truly is.
Absent an explicit comment from Berkowitz on this matter, let me provide my own comment, with which I think he (and Hannah Arendt) would agree. There can never be a "politics of inevitability," because politics is the realm, always, of both freedom and possibility. Within the political world that we create, nothing is "inevitable."
To Subscribe Just Click This Link
Image Credit:
https://hac.bard.edu/amor-mundi/the-politics-of-inevitability-2022-03-20