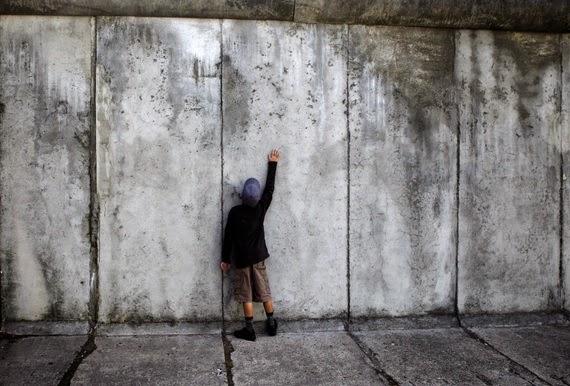 The image shows a boy touching the east side of the former Berlin Wall, and was used to illustrate an essay in The Atlantic titled, "It's Still Not the End of History."  According to the photo credit in The Atlantic, the picture was taken by Markus Schreiber of the Associated Press.

The article was written by Timothy Stanley and Alexander Lee, and was published on September 1, 2014. The point of the article was to critique the announcement by Francis Fukuyama, twenty-five years ago this summer, that we had reached the “end of history,” and and that the triumph of liberal capitalist democracy was assured.

In 2014, this is apparently not so clear, at least to Stanley and Lee. Their critique seems well-merited.

I think both the original essay and the recent "refutation" are worth reading, and I commend them to you. Here is the statement in the Stanley and Lee article that first caught my attention:

The connection between capitalism, democracy, and liberalism upon which Fukuyama’s argument depended has ... been broken. ... It has become increasingly clear that prosperity is not, in fact, best served either by the pursuit of laissez-faire economics or by the inexorable extension of economic freedoms. ... Liberal capitalist democracy hasn’t triumphed. Instead, the failures of capitalism have turned democracy against liberalism.

Note in this statement, if you will, an assumption that the "purpose" of democracy (or liberalism) is "prosperity." The statement assumes that the production of wealth (and perhaps its "liberal" distribution in society) is inevitably what our political systems are supposed to be all about. I, personally, don't concede that this is actually true, though I will admit that this idea about the purpose of politics might well receive a majority vote.

I do agree with Stanley and Lee, as they pursue their argument, that "determinisms" of any kind are always offensive (and wrong):

The idea that there is a “historical law” guiding the development of societies is fanciful. Even if there were some weird sort of pattern which suggested that “liberal” ideas did indeed “win out” in the past, it wouldn’t be anything more than a mere curiosity. It wouldn’t prove anything about liberalism in itself, nor would it say anything about the future. It would just tell us what happened before. To read meaning or predictive power into any pattern in the past is, in fact, about as intellectually respectable as reading tea leaves. ... If liberalism is to survive and flourish, it has to be rescued from Fukuyama’s grasp and from the perils of historical determinism. It has to be defined and defended all over again.

In the end, Stanley and Lee are arguing for "morality" in politics, and that concept, for them, consists in a necessary deference to the individual:

Liberalism is defined by a commitment to liberty. At root, liberty is a concept grounded in the individual. It is the freedom to be all that one is, to actualize the fullness of one’s potential as a human being endowed with the capacity for creativity and the ability to make autonomous value judgments for ourselves.

My perspective, I must say, is somewhat different from that of Stanley and Lee, though I am sympathetic to much of what they say. Material "prosperity" is a worthy social goal, particularly if the wealth we create is a benefit generally shared, and that wealth is distributed equitably within society. A commitment to individual liberty is critical as well, but so is a commitment to our ability, together, to construct whatever world we want, the best world we can imagine and conceive. That, more general goal, not "prosperity," is the true objective of our politics.

But I do agree with Stanley and Lee that there is no "wall." There is no "end to history." The wall the little boy touched came down. Whatever walls we face can be removed, but only when we act together.

As my favorite political philosopher, Hannah Arendt, says, we can, each day, begin our world anew.

Sometimes, this is called a "Revolution."

High time for some new history.