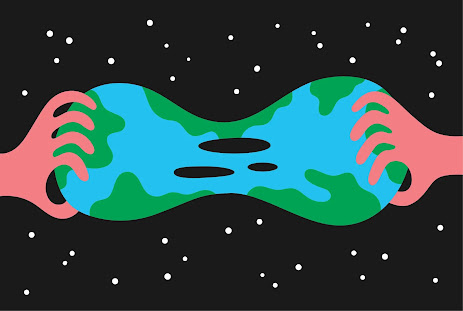 The pundits are predicting a global contest. Or maybe "predicating" is a better word. The stakes are high, the pundits say, and which way the contest will be decided is not yet clear.
We - the United States - are "the West," representing "democracy." That's the "good guy" side, of course. The other side, the side of "the East," dedicated to "autocracy," is either Russia, or China, or all of the non-democratic nations around the world. Which side will win? That's the question that the pundits are pondering. Here's the answer that the pundits provide: Not yet clear!
This hypothesized "global competition" was the topic discussed in my "What If?" blog posting on April 3rd. Three different pundits got their points in. You can click the link to review the arguments.
On April 19th, my blog posting was titled, "How The West Can Win." In that blog posting, I outlined a rather rosy prediction by Greg Ip, a pundit who was playing point guard for The Wall Street Journal. Ip advanced the thesis that the United States would win the hypothesized global competition because of our ability to dominate in the sphere of "commercially useful technology." Again, click the link to that blog posting if you'd like to consider whether or not Ip has truly made his case.
I addressed the "global competition" issue again in a blog posting published on April 27th. That one was titled, "One World?" My blog posting on that date discussed a warning published by The Manhattan Institute, claiming that the current conflict in Ukraine is actually an ultimate "showdown between East and West." The Manhattan Institute advises that we are actually battling someone whom The Jewish Chronicle has identified as a "sinister ideologue." Alexander Dugin, the person in question, is identified by The Manhattan Institute as "Putin's Philosopher."  We are told that we had better "know our enemy," or we might just lose the global struggle now underway.
Another popular pundit, The New York Times' David Brooks, has turned his attention to the pundit-friendly topic of the global competition between "the West" and "the East." Brooks' column lamented the fact that "globalization" now appears to be on the wane, and postulates that the East-West competition is now a global "culture war." One of Brooks' statements struck me as exactly right. There is, said Brooks, "a lot of complexity here."
This whole question of a global "culture war," or a global competition between "East" and "West," and democratic versus autocratic governments, does seem to raise complex questions.
Can't we simplify?
I would like to make the same point, here, that I made in my earlier blog postings. My reaction to the claims made by the pundits (specifically to the claims made by David Brooks) is that the postulated "global conflict" is a conceptual construct, not an actual and inevitable "reality." Are there conflicts between nations? Yes. Of course there are. Are there conflicts between "the West" and "the East?" Of course there are. Are there conflicts between "democratic" and "autocratic" governments. Yes. Yes. Yes. Of course there are.
But are all these enumerated "conflicts" the most important thing?
Not in my opinion.
Just as there are conflicts, so, too, are there common bonds. "Globalization," properly understood, is not going to disappear, because we all populate the same round Earth, whatever the political or economic system under which we most directly live. We are all, ever more clearly, living in a common world - the World of Nature - a world now at risk, with the risks affecting every human being on the planet.
The Global Warming / Climate Crisis is a crisis that imperils us all, and we cannot succeed in confronting and overcoming this crisis unless we maximize cooperation and collaboration, instead of making conflict and competition as the basis for our relationships.
We have an opportunity, today, truly to "save the world," but we will succeed in doing so, and make it possible for human civilization to survive, only as we succeed in setting aside our postulated "global conflicts."
Think about it! That is actually true. So, let's get the pundits to start focusing on that fact, and not on their predicated conflicts, which, to the degree we honor those conflicts as the realities that must guide our actions, will ensure that we will fail.
Image Credits:
https://www.nytimes.com/2022/04/08/opinion/globalization-global-culture-war.html
To Subscribe Just Click This Link