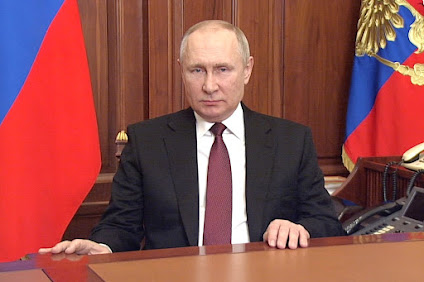 Both The Wall Street Journal and The New York Times have lent their pages to columnists who are making a rather "upbeat" appraisal of what has been happening in Ukraine - at least upbeat with respect to seeing the Russian invasion of Ukraine as a test of whether democracy or autocracy is the stronger and more successful political system.
On Wednesday, March 30, 2022, writing in The Times, columnist Thomas Friedman has opined that Putin (and Russia) have made a big mistake. In fact, says Friedman, "Putin ... got it all wrong." Putin "overestimated the strength of his own armed forces, underestimated the willingness of Ukrainians to fight ... and misread the willingness of the West to unite to support Ukraine." The way Friedman sees it, events have demonstrated that the Russian invasion of Ukraine is a kind of "case study" proof that democratic societies and democratic governments are almost always going to be stronger and more effective than autocracies. Presuming you can pierce the paywall, the following link will take you to Friedman's column, entitled, "The Strongmen Follies."
Holman W. Jenkins, Jr., writing in The Wall Street Journal - and writing on the very same day as Friedman - arrives at pretty much the same conclusion. His column is titled, "Putin's Crisis of Authoritarianism." Jenkins says that "Russia's debacle in Ukraine shows democracy isn't the model that's failing."
I actually agree with both these columnists that democracy is inherently a stronger and more resilient form of government than autocracy, and for the reasons they suggest. However, there was another column in The New York Times on March 30, 2022, that does make one stop and think. That column, by Bret Stephens, is headlined as follows:
What if Putin Didn't Miscalculate?
It is Stephens' suggestion that Putin may not, in fact, be a semi-demented and distracted dictator who has made a big mistake. Stephens thinks that Putin may well never have intended to take over Ukraine in its entirety, and that what Putin wants to do is to consolidate Russian control over the energy resources of the eastern portions of Ukraine, which Stephens says has Europe's second-largest known reserves of natural gas. Energy dominance, not the mystic reunification of the entirety of the Russian-speaking world, could be what Putin is really shooting for. If that's the actual goal, says Stephens, Putin's invasion may well work out quite well for him.
It is always wiser to treat one's adversary as a "canny fox, not a crazy fool." That is Stephens' advice, and that is pretty good advice, it seems to me. Evaluations of the invasion of Ukraine, premised on the belief that Putin and Russia have made a big mistake, could be significantly off the mark.
What is not off the mark, in my judgment, is the fact that the horrors of what is happening in Ukraine - visible to us now in a way that similar horrors that the United States itself perpetrated in Iraq were not - indicate that the world's efforts to end this invasion must be carried out under the banner, "Never Again." The United States can use this occasion to concede that it, too (and maybe more than any other country) has used military means to try to achieve goals it thought important, and that this way of trying to achieve national objectives is not only a failure, as strategy, but it morally unacceptable.
The nations of the world (and that definitely includes the United States) need to abandon the idea that military might is the way to guarantee peace and stability. It is not. Ukraine proves it. If we didn't see this before, we see it now.
The world has a pressing, global challenge to confront - global warming and climate change. The United States is the only nation in the world that can credibly call upon all nations to start demilitarizing, and start investing their resources, now spent on armies and armaments, in the actions that may succeed in averting the global catastrophe that we know is looming before us. But, of course, we can only do that when we repurpose our own military spending, and give up the idea that the United States, instead of the United Nations, should be making decisions about how the world should work.
Democracies can adapt. Democracies can change. Jenkins and Friedman are right about that, and now is the time we need to prove it.
To Subscribe Just Click This Link
Image Credit:
https://people.com/politics/what-is-known-and-not-known-about-vladimir-putins-family/