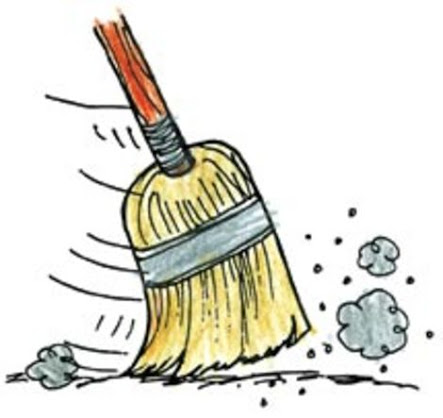 Many of those who follow professional basketball, as fans of the Golden State Warriors, may be enjoying a moment of schadenfreude, right now, as they compare what is happening to the Warriors in the NBA playoffs, with what has happened to the Brooklyn Nets.
"Schadenfreude," for those not recognizing this word taken from the German, is not what might be called a "noble" sentiment. Wikipedia defines "schadenfreude" as follows: "The experience of pleasure, joy, or self-satisfaction that comes from learning of or witnessing the troubles, failures, or humiliation of another."
In this case, who is that "another" person, whose humiliation makes some Warriors' fans feel happy? Well, if you were a Warriors' fan yourself you wouldn't need to ask. That "another" person, the humiliation of whom brings joy to the hearts of at least some Warriors' partisans, is Kevin Durant, who is pictured below. The picture depicts Durant as Durant's team, the Brooklyn Nets, were eliminated from the NBA playoffs, in four straight games, in a series swept by the Boston Celtics. 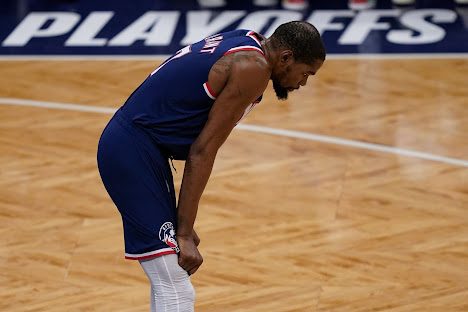 The picture comes from a Wall Street Journal article, published on Wednesday, April 27, 2022. The article is headlined, "Tick, Tick...Broom! The Nets Get Swept in Brooklyn." Meantime, as The Nets got swept, the Golden State Warriors advanced to the "second round" of the playoffs, achieving that by beating The Denver Nuggets 4-1, having almost "swept" the Nuggets themselves.
Dieter Kurtenbach, who writes on sports for the Bay Area News Group, which includes both the Santa Cruz Sentinel and the San Jose Mercury News, wrote on the fate of The Nets in a column published on the same day that The Wall Street Journal ran that "Tick, Tick...Broom" news report. A bit of schadenfreude did seem evident, at least to my thinking, as Kurtenbach's column was titled, "The brilliance of Steph Curry’s leadership is explained by Kevin Durant’s playoff failure." Kurtenbach went on to say that The Nets are "Durant's team," and so the failure of The Nets is a personal failure of Durant.
Durant's decision to leave The Warriors, a couple of seasons ago, was a genuine body blow to the Warriors, which then failed even to make the NBA playoffs. This is where the "schadenfreude" comes in for Warriors' fans. However, while I might be experiencing a smidgen of that less than noble sentiment myself, in writing about The Nets' failure in the first round of the playoffs, here is the real reason I picked out The Wall Street Journal article for this blog commentary. Writing for The Journal, sportswriter Jason Gay said this, right at the end of his commentary (a commentary that is worth reading in its entirety, if you follow basketball):

Even in defeat, the Nets act as if they’re just a few bounces from greatness, and the thing is: it could be true! Durant and Irving really are that good, and if Harris and Simmons return to their full selves, the Nets could be a handful in 2022-23.

But maybe that’s not their destiny. Maybe these Nets are a perfect team for their time—an irrationally confident era in which an alarming number of people seem to think that details don’t matter, and just saying something makes it so.

Then again, maybe the Nets are here to bring us a different kind of satisfaction, which is to remind us that basketball, though a game of transcendent individual highlights, is fundamentally a team sport. It cannot be hacked by assembling a few pieces of otherworldly talent, it cannot be overcome by one person’s excellence, or committed to part-time, it must be played coherently, together, and that is basketball’s highest expression: teamwork.

That’s why Boston has a shot. And the Nets have the broom (emphasis added).

"Stronger together" is another way to put it. The Golden State Warriors are known for "Warriors Ball," in which the "team" is all. A collection of great talents isn't what makes The Warriors great - and that lesson is true for all of us, in every aspect of our lives. We are "individuals," it's true - and that's important - but we are, above all else, "in this together."
When our nation, and when the world, starts dealing with our challenges and opportunities as though we were playing "Warriors Ball" - when we start playing like we are all on the same "team," as we truly are - then we will find ourselves on the way to success. If we maintain our current commitment to "individualism" as our reigning principle, we're going to get swept.
We are going to get swept right into that "dustbin of history" you may have heard about!
Image Credits:
(1) - https://www.varsityvacuums.com/sweeping-vs-vacuuming/
(2) -  https://www.wsj.com/articles/brooklyn-nets-kevin-durant-kyrie-irving-11650983281
To Subscribe Just Click This Link