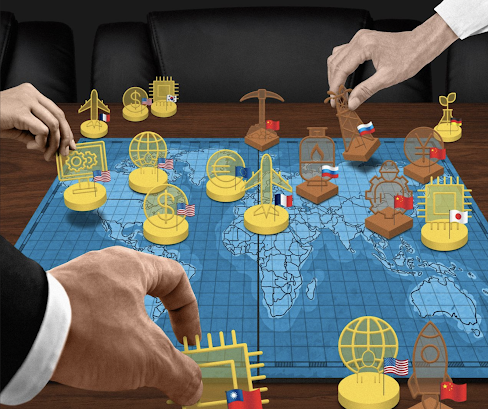 By way of an article by Greg Ip, which ran in the Saturday-Sunday, March 19-20, 2022, edition of The Wall Street Journal, we are told "How the West Can Win A Global Power Struggle." The "West," of course, basically means "the United States." The "East," really, means "China."
Not surprisingly, since The Journal is more or less the "paper of record" for the capitalist class in the United States, Ip's article provides this advice:

While sanctions on Russia demonstrate the West’s control of the global financial system, long-run economic advantage will come from technology and knowledge. In pure science—such as space travel and atomic energy—Russia and China certainly hold their own. But in commercially useful technology, Western companies lead in almost every field, from commercial aviation and biotechnology to semiconductors and software.

What we need to do, in other words - what we need to do if we want to "win" - is to mobilize our control of the world's financial system to keep the "West" on top in the development of technology, and to use our domination of "commercially useful" technology to continue to make sure that the biggest share of the world's resources come to us.
Ip proffers the following caution, after having touted how much the United States excels in "knowledge" and "human capital."

China has studied very carefully the American postwar model of how their global and regional military domination was augmented by financial and economic domination,” said Mr. Rudd. China, he said, seeks to achieve its foreign policy aims by making countries throughout Asia, including American allies, dependent on its trade and investment, and eventually its currency. Mr. Rudd urged the U.S. to return to the TPP and revive a similar pact with Europe. The U.S. needs to recognize where its strategic advantage lies, “which is through free trade, open commerce and open capital flows.

I have a comment, which I think is pertinent.
Defining our current world situation as a military and economic competition between "West" and "East," as Ip's article presents it, is to misunderstand the reality we actually inhabit. While it is true that there are differences between nations, which we can categorize in East/West terms if we want to, the individual nations of the world are actually all in the same situation. Nations, like each one of us, are "individuals," but we are also "in this together."
For the "West" truly to "win," the "East" must "win," too. For the global "North" to "win," the global "South" must "win," too.
Humankind is facing cascading calamities that affect us all: (1) global warming and climate change, (2) the ever more likely danger of atomic war, and (3) economic and social inequalities and injustices that have escalated to an extreme and unsupportable degree. This is only a "partial list."
Right now, if the "West" wants to "win," we need to remobilize the financial resources over which we have control, and deploy them in a way that will make sure that people in every part of the world "win," too. We must use our resources to make sure that the East and the West, and the North and the South, do everything we all can possibly do to eliminate greenhouse gas emissions, and to ensure that every person, everywhere in the world, has adequate food, clean water, housing, health care, and education. To do that - and this is a bonus - we must demilitarize ourselves and eliminate the threat of nuclear war.
The only way to "win," in other words, is to stop trying to "win," since "winning" is based on a false competition that erroneously suggests that taking from others, to advance our own interests, and aggrandizing ourselves at the expense of the rest of the world, is some kind of actual benefit. It's not. Quite the opposite.
Seeing the world as a "competition" is the mistake. We are, truly, "in this together," and we need to start acting as though we understand this immensely important reality.
To Subscribe Just Click This Link
Image Credit:
https://www.wsj.com/articles/how-the-west-can-win-a-global-power-struggle-11647615557