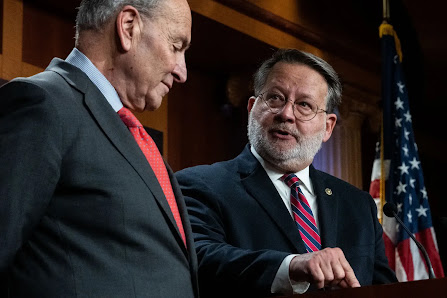 In the photo above, associated with an article in The New York Times that ran in the paper on Friday, December 16, 2022, Senator Gary Peters, of Michigan, is speaking with the Senate Majority Leader, Chuck Schumer, of New York. Based on what the article tells us, Peters may well be saying, "Localize, Localize, Localize."
During the recent 2022 electoral campaigns, around the nation, Peters served as the Chair of the Democratic Senatorial Campaign Committee - the DSCC. He was, in other words, the chief political strategist for the Democratic Party, with respect to the party's ability to send Democratic Party Senators to Congress. Peters gets a significant share of the credit for the success of the elections that resulted in the Democratic Party actually expanding its majority in the Senate.
The article in The Times is well worth reading, if you are interested in politics (your subscriber status may determine whether or not clicking that link will actually let you read it). Here's what I thought was most notable in the article: Peters emphasized that successful candidates were able to "localize" their appeal to the voters. A former Democratic Party Speaker of the House made the same point. "All politics is local," said Tip O'Neill.
We, as citizens, are most powerful at the local level. In order to have a national politics that responds to the needs of the nation, we need to rebuild our democracy from the "bottom up." The "localize, localize, localize" admonition only really works if there is a democratic heartbeat still remaining at the local level.
If you are worried about the massive inadequacies of our national government, and our national politics, here's what I say: "Join the crowd!"
Let me suggest, though, that there is an antidote: "Localize, Localize, Localize."
My advice is that we should all get involved in the politics of our local community (you should even get a group together and run for office yourself, perhaps). We need to learn how to make our local governments work for us. More than learning about it, in fact, we need to MAKE  our local governments work for us.
A strong democracy, deeply rooted at the local level, will never succumb to authoritarian appeals at the national level.
But without a healthy, vigorous local democracy, and when our local politics wanes ....?
We're in trouble.
So let's listen to Gary Peters (who has the same advice as Gary Patton):
Localize, Localize, Localize
To Subscribe Just Click This Link
Image Credit:
https://www.nytimes.com/2022/12/15/us/politics/gary-peters-senate-democrats-majority.html