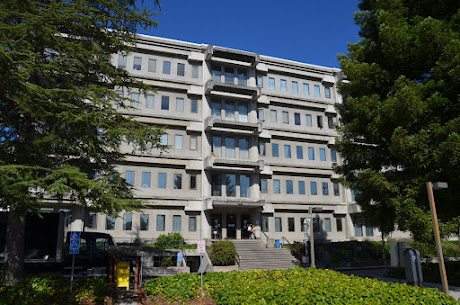 That picture, above, is of the Santa Cruz County Governmental Center, located at 701 Ocean Street, in Santa Cruz. I spent twenty years there, up on the Fifth Floor, as a member of the Santa Cruz County Board of Supervisors. I served on the Board, representing the Third Supervisorial District in Santa Cruz County, from 1975 to 1995.
On April 15, 2022, a column in the San Jose Mercury News caught my attention. Columnist Joe Mathews, formerly a reporter for the Los Angeles Times, writes a "Connecting California" column for Zócalo Public Square. He is, in other words, pretty much California-centric in his commentaries. I have noticed, though, that Mathews must have some sort of connection with, or interest in, France. Since I spent six months in France, as a college sophomore, and have a sister who has permanently relocated to France, I have the same interest.
In 2016, I commented on one of Mathews' columns discussing an "apocalyptic" French philosopher, Jean-Pierre Dupuy, whom Mathews believed had acquired an unhealthy sway over the thinking of then-Governor Jerry Brown. Mathews' April 15th column, this year, also discussed French politics and government. Specifically, Mathews headlined his April 15th column as follows: "France shows the perils of powerless local democracy." My eye was drawn to the following assertion:

At the heart of the French democratic recession is a void where local democracy should be. That void stems from France's highly centralized system of government. Democracy, at its core, is a local thing....

This observation, I believe, is absolutely true. Democracy, at its core, is a local thing, and I think that the key to maintaining American democracy will be found at the local government level.
Why do I think this?
Mathews doesn't really spell out his own argument, but here is how l would explain why Mathews is right to link the health of democracy to the presence of powerful and effective local government:
As an elected official, I used to speak, quite often, to high school classes, and one of my messages was that I was the "most powerful" public official that those students would likely ever meet. This might have seemed strange to the students, and I wanted them to think about whether or not I was right.
Suppose a member of the United States Congress came to visit the class (not an impossibility, at all, in our community). That Member of Congress would represent 1/525th of the voting power of the Congress (there are 100 Senators and 435 Members serve in the House). What about a Member of the California State Legislature? A Member of the Legislature would represent 1/120th of the voting power of the Legislature (there are 40 Senators and 80 Assembly Members).
In my case, I represented 20% or 1/5th of the voting power of the Board of Supervisors. If I could convince two other Supervisors to vote my way, then we three elected officials could do anything that was within the power of county government. And that was quite a lot!
"Power" is defined as the ability to "do work," or to "make change," or to "have an effect." While each one of us has an ability to impact what our elected officials do, at any level of government, our individual impact is maximized at the local level - just as the power of individual elected officials is greatest at the local level.
If we believe that anything we do, politically, is not likely to have any real impact, it is pretty hard to rally up the strength to get involved. If we think we can have an impact, then it will make more sense for us to get engaged and involved (since we can actually make a difference if we do).
Like Joe Mathews says, "democracy, at its core, is a local thing!
To Subscribe Just Click This Link
Image Credit:
https://santacruzlocal.org/2020/10/06/santa-cruz-county-public-defender-overhaul-questioned/