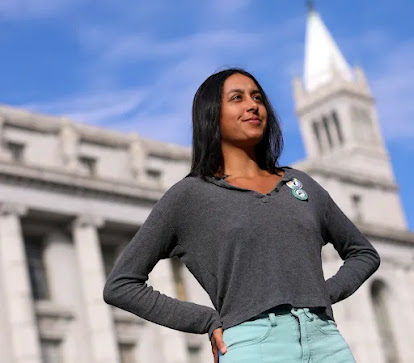 Elise Joshi, pictured, is a UC Berkeley student who also serves, simultaneously, as the Executive Director of Gen-Z For Change, a nonprofit organization that describes its mission as:

I read about Joshi, and her organization, in an article that appeared in the December 18, 2022, edition of the Mercury News. The article was titled, "A New Era of Activism." This is, of course, the hard copy version of the headline. Online, headlines will differ! Originally, the organization was apparently called, "TikTok For Biden."
On the same day I read about Joshi's organization, but in a different newspaper, I read the following Letter to the Editor. Here is what Alison Doniger, from Berkeley, had to say to the readers of the San Francisco Chronicle:

I would like to think that generational differences might not be a cause for division, with respect to the incredibly important challenges that now confront all of us who are alive. It should be obvious that we face these challenges together.
A 1991 book by William Strauss and Neil Howe, Generations - The History of America's Future, 1584 to 2069, offers me some hope on that score. Even though it is now thirty years old, the book is supposed to provide us with some worthwhile guidance on into 2069 - at least if you credit the title. While I totally reject the idea of historical determinism, I do find the "generational theory" that the book propounds to be worth some serious consideration. Here is how Wikipedia outlines what Strauss and Howe say about how different generations interrelate:

The Strauss–Howe generational theory, devised by William Strauss and Neil Howe, describes a theorized recurring generation cycle in American history and Western history. According to the theory, historical events are associated with recurring generational personas (archetypes). Each generational persona unleashes a new era (called a turning) lasting around 20–25 years, in which a new social, political, and economic climate (mood) exists. They are part of a larger cyclical "saeculum" (a long human life, which usually spans between 80 and 100 years, although some saecula have lasted longer). The theory states that a crisis recurs in American history after every saeculum, which is followed by a recovery (high). During this recovery, institutions and communitarian values are strong. Ultimately, succeeding generational archetypes attack and weaken institutions in the name of autonomy and individualism, which eventually creates a tumultuous political environment that ripens conditions for another crisis.

While not making any specific prediction, Strauss and Howe "project a crisis lasting from 2013 to 2024." They hedge their bets, a bit, by quickly saying that another calculation suggests that there might be a "crisis lasting from 2020 to 2029." Given that 2024 is a presidential election year, a crisis in that year seems all too likely, but even with the longer timeline, if the Strauss and Howe theory has any merit, the political, economic, and social life of the nation is due for a fundamental transformation within the next few years.
And here is the interesting part - the part I find so potentially hopeful. Strauss and Howe believe that the transformations that will occur in the near future will come from the conjoined efforts of the generation to which I belong and the generation now called "Generation-Z."
Wouldn't that be great!
To Subscribe Just Click This Link
Image Credit:
https://www.mercurynews.com/2022/12/16/sv-chat-elise-joshi-gen-z-for-change-and-a-new-era-of-labor-activism/