Caitlin Johnstone, who identifies as a "rogue journalist," and who sends out periodic bulletins called, "Notes From The Edge of the Narrative Matrix," has been mentioned in some of my earlier blog postings. Click that link for one of them.
Johnstone published one such "Note From The Edge" back in mid-December, specifically on December 17, 2022. Here is the first paragraph: 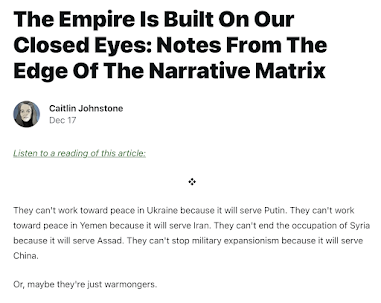 Johnstone's "they" includes pretty much everyone in charge of the United States Government - all those people who explain (usually very patiently) why the United States of America has to spend more money on its military than the next nine nations combined, and why it is imperative that we risk nuclear war to bring assistance to Ukraine.
Johnstone is suggesting that maybe the reason that all these people keep telling us these things, keep insisting, so patiently, that we need to be engaging in military actions everywhere in the world - por todos lados, if you want to say it in Spanish - is actually that they are just "warmongers."
When I read that, I wondered if Johnstone might have her finger on something important, and to pursue my thought, I decided to look up the word "monger," to see how it is defined. Here's how:

monger
noun
mon·ger ˈməŋ-gər
: broker, dealer, peddler
: a person who attempts to stir up or spread something that is usually petty or discreditable
—usually used in combination
warmonger

As it turns out, a former United States Army General (and the President of the United States at the time the above photo was taken) told the nation, back in 1961 (the year I graduated from high school), that we needed to be worried about a so-called "military-industrial complex" that was going to be trying to influence us in just the way Johnstone is talking about.
Dwight was right!
All these people who so patiently explain to us just why we need to build bombs (and then use them) all over the world are just "warmongers." They are just peddling military involvements so they can make money.
Shame on us if we let them!
To Subscribe Just Click This Link
Image Credits:
(1) - https://www.shapell.org/behind-the-scenes/dwight-d-eisenhower-and-the-rarity-of-his-presidential-letters-7/
(2) - https://caitlinjohnstone.com/2022/12/17/the-empire-is-built-on-our-closed-eyes-notes-from-the-edge-of-the-narrative-matrix/