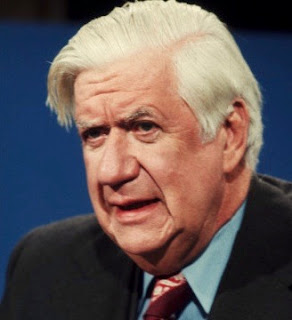 Tip O'Neill (pictured) represented Boston in the U.S. House of Representatives for thirty-four years, and he served as Speaker of the House from 1987 until his retirement in 1997. O'Neill is generally thought to have been a master of Congressional politics, and he wrote a widely-acclaimed book called All Politics Is Local. I have mentioned O'Neill's book before, and I'm a fan.

Alan Abramowitz and Steven Webster, political scientists affiliated with Emory University, present a view somewhat different from O'Neill's. They have published a paper about the rise of partisanship in U.S. House and Senate elections in the 21st Century, and have titled their paper, "All Politics Is National."

Vox, which maintains a website specializing in "policy and politics," has publicized the Abramowitz-Webster paper, and Vox found it "deeply depressing." That's because the "All Politics Is National" paper seems to suggest that voters' views are mainly motivated by fear and hatred of the opposing political party.

A fun demonstration of the effects of partisan polarization can be seen by clicking this link. The link will take you to a Huffington Post video that is well worth viewing. I am not so sure, however, that the video proves the point urged by Abramowitz and Webster, and deplored by Vox. The video actually seems to demonstrate that a person's position on the issues may be quite independent of partisan affiliation, though it also demonstrates that party affiliation has a determinative impact on a person's view of political candidates.

Here's my takeaway from all of this: We should stick with O'Neill and his "all politics is local" admonition, and try to keep politics as local as we can. Not only are most local elections nonpartisan, it's harder to hate and fear someone who may live right down the road. It's a lot easier to hate and fear them if they come from some far away and unknown place.

Hatred and fear, of course, are no basis for a healthy politics, anywhere or anytime. If we can't escape from hatred and fear, as we engage in the debate and discussion, and the conflict and controversy, that are the very first step in political decision making, then we'll never be able to get to the next step, the cooperation and compromise that is what allows us to reach a decision, amidst our differences, and thus to take action to deal with the challenges we face.

The challenges we face we always face together. We fool ourselves if we think otherwise. Given that truth, banishing hatred and fear as our main political motivators is a very high priority. Easier to accomplish when all politics is "local."