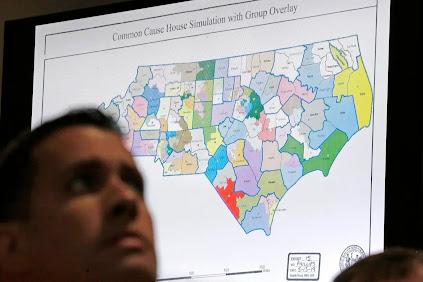 Both The New York Times and SCOTUSblog have alerted their readers to a case that the Supreme Court will consider when it reconvenes in October.
SCOTUSblog headlines its article this way: "Justices will hear case that tests power of state legislatures to set rules for federal elections." The Times says the case "has the potential to amplify the influence of state lawmakers over federal elections."
I have been making the case that we need a "bottoms up" approach to our national politics. That was basically the argument in my "Bottoms Up," and "Bottoms Up II" postings from earlier this year. The elections case that the Supreme Court will decide during its next term emphasizes how important that will really be. Here is a short description of what's at stake:

The Supreme Court will take up a case from North Carolina next term that could upend federal elections by eliminating virtually all oversight of those elections by state courts. On Thursday, the justices granted review in Moore v. Harper, a dispute arising from the state’s efforts to draw new congressional maps in response to the 2020 census. The doctrine at the heart of the case is known as the “independent state legislature” theory – the idea that, under the Constitution, only the legislature has the power to regulate federal elections, without interference from state courts. Proponents of the theory point to the Constitution’s elections clause, which gives state legislatures the power to set the “Times, Places and Manner of holding Elections for Senators and Representatives.”

As we should all be aware, the efforts that former president Trump made to subvert the 2020 national election, and to retain the presidency even though he lost that election, was based on ideas advanced by attorney John Eastman. There is significant evidence that the failure of that plan has not prevented Trump and his confederates from trying to "update" the Eastman approach, with the objective of making it possible to use state legislative power to put Trump into office in 2024, even though he might lose another presidential election in that year:

For more than a year now, with tacit and explicit support from their party’s national leaders, state Republican operatives have been building an apparatus of election theft. Elected officials in Arizona, Texas, Georgia, Pennsylvania, Wisconsin, Michigan, and other states have studied Donald Trump’s crusade to overturn the 2020 election. They have noted the points of failure and have taken concrete steps to avoid failure next time. Some of them have rewritten statutes to seize partisan control of decisions about which ballots to count and which to discard, which results to certify and which to reject. They are driving out or stripping power from election officials who refused to go along with the plot last November, aiming to replace them with exponents of the Big Lie. They are fine-tuning a legal argument that purports to allow state legislators to override the choice of the voters (emphasis added).

The article from The Atlantic, from which the above paragraph is taken, makes clear that plans for a 2024 electoral "coup" will depend on using state legislative power to run elections that are not "fair," but that will give electoral votes to candidate Trump (or another far-right politician running as a Republican). Given that possibility, the Supreme Court's decision to consider that case from North Carolina, in which the Court could find that state legislatures can make any rules they want to, without facing any court challenge, does not bode well for democracy.
We do have a "federal" system of government, which means that we had better figure out how to make a "bottoms up" politics work. Failure to do so could just mean the end of that "democracy" that we can no longer take for granted.
Personal political engagement and involvement, at the local and state levels of government, are absolutely required!
To Subscribe Just Click This Link
Image Credit:
https://www.nytimes.com/2022/06/30/us/state-legislatures-elections-supreme-court.html