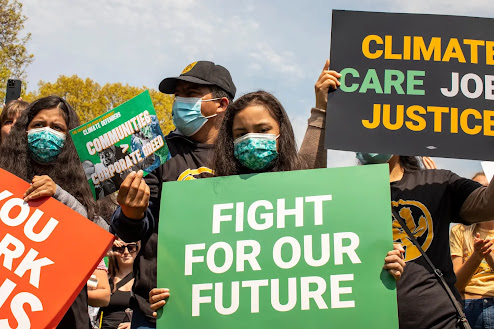 The President's comprehensive climate bill (with some other extremely important issues also addressed in this legislation) will shortly be the law of the land. Getting that bill passed through both Houses of Congress, as is generally recognized, was a significant political accomplishment. It is not, though, nearly enough - or, at least, that is the view of many young people (and some older types, too, like yours truly).
"As Historic Climate Bill Heads to Biden’s Desk, Young Activists Demand More." That is the title of a New York Times' article by Lisa Friedman and Coral Davenport:

Scientists say the United States needs to do more. It must stop adding carbon dioxide to the atmosphere by 2050, which the bill won’t achieve. That is the target all major economies must meet to constrain average global temperature rise to 1.5 degrees Celsius, or 2.7 degrees Fahrenheit, above preindustrial levels, scientists say. Beyond that threshold, the likelihood increases significantly of catastrophic droughts, floods, wildfires and heat waves. The planet has already warmed an average of about 1.1 degrees Celsius.

It’s like losing 20 pounds when you need to lose 100 pounds,” said Robert McNally, the president of Rapidan Energy Group, an energy consulting firm. “And this won’t get you there.”

In my view, the "Inflation Reduction Act of 2022," the official name of the bill just passed, is a triumph of our current politics.
But those "young activists" are right. It's not enough.
Now, we need to move beyond our "current politics." We are going to have to forge a new kind of politics. I think we can.
In fact, I know we "can," because nothing is impossible in the human world that is our own creation.
So, it's not really a matter of "can."
It's a matter of "will we?"
In fact, it's a matter of "must."
To Subscribe Just Click This Link
Image Credit:
https://www.nytimes.com/2022/08/12/climate/biden-climate-bill-young-activists.html