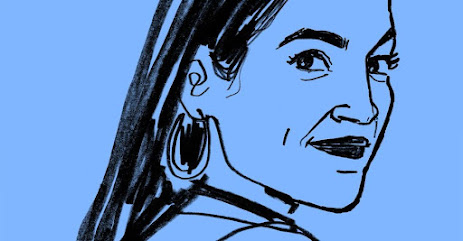 Shortly after writing that "Bottoms Up" commentary, which I published in this blog yesterday, I read an article in The New Yorker magazine, online, that documented a conversation between David Remnick, the editor of The New Yorker, and Alexandria Ocasio-Cortez, who represents a New York City congressional district.
The New Yorker article was titled, "Is Alexandria Ocasio-Cortez an Insider Now?" I thought that the discussion between Remnick and Ocasio-Cortez was worthwhile reading, and it would be great for anyone reading this blog posting to click the link above, and to read the entire article for themselves.
There may be a problem with that suggestion, though - as I am quite aware. I am a New Yorker subscriber, and so I had no trouble reading the article. However, the experience of non-subscribers could differ, as The New Yorker's paywall policies may ordain. If you can't get access to the entire article, I am sorry, but if you can't, here is a pretty significant excerpt, coming right at the end of the conversation. The bolding is in the original:

The social-media folks at The New Yorker invited people to propose questions for you via Instagram. Hope is the theme that is the center of almost all of these. If I can distill them, the most basic question is, What would you say to people, particularly young people, who have lost hope?

I’ve been there. And what I can say is that, when you’re feeling like you’ve lost hope, it’s a very passive experience, which is part of what makes it so depressing.

And that’s what I had to go through. There was all this hope when Obama was elected, in 2008. And, at the end of the day, a lot of people that had hope in our whole country had those hopes dashed.

I graduated. My dad died. My family had medical debt, because we live in the jankiest medical system in the developed world. My childhood home was on the precipice of being taken away by big banks. I’d be home, and there’d be bankers in cars parked in front of my house, taking pictures for the inevitable day that they were going to kick us out.

I was supposed to be the great first generation to go to college, and I graduated into a recession where bartending, legitimately, and waitressing, legitimately, paid more than any college-level entry job that was available to me. I had a complete lack of hope. I saw a Democratic Party that was too distracted by institutionalized power to stand up for working people. And I decided this is bullshit. No one, absolutely no one, cares about people like me, and this is hopeless. And I lost hope.

How did that manifest itself?

It manifested in depression. Feeling like you have no agency, and that you are completely subject to the decisions of people who do not care about you, is a profoundly depressing experience. It’s a very invisibilizing experience. And I lived in that for years. This is where sometimes what I do is speak to the psychology of our politics rather than to the polling of our politics. What’s really important for people to understand is that to change that tide and to actually have this well of hope you have to operate on your direct level of human experience.

When people start engaging individually enough, it starts to amount to something bigger. We have a culture of immediate gratification where if you do something and it doesn’t pay off right away we think it’s pointless.

But, if more people start to truly cherish and value the engagement and the work in their own back yard, it will precipitate much larger change. And the thing about people’s movements is that the opposite is very top-down. When you have folks with a profound amount of money, power, influence, and they really want to make something happen, they start with media. You look at these right-wing organizations, they create YouTube channels. They create their podcast stars. They have Fox News as their own personal ideological television outlet.

Legitimate change in favor of public opinion is the opposite. It takes a lot of mass-public-building engagement, unrecognized work until it gets to the point that it is so big that to ignore it threatens the legitimacy of mass-media outlets, institutions of power, etc. It has to get so big that it is unignorable, in order for these positions up top to respond. And so people get very discouraged here.

Going forward, what do you think is the optimal role for you to play?

With the Climate Justice Alliance, some communities here at home say that they don’t talk about leadership, they talk about being leaderful. And I think that people’s movements, especially in the United States, are leaderful. And we’re getting more people every day. The untold story is actually the momentum of what is happening on the ground. You have Starbucks that just unionized its first shops in Buffalo. I went up there to visit them. Sure, I went over there to support a mayoral election which didn’t ultimately pan out, but also to support a lot of what was going on. I would argue that if it wasn’t for that mayoral election and the amount of intensity and organizing and hope and attention, a lot of these workers who were organizing may have given up.

There is no movement, there is no effort, there is no unionizing, there is no fight for the vote, there is no resistance to draconian abortion laws, if people think that the future is baked in and nothing is possible and that we’re doomed. Even on climate—or especially on climate. And so the day-to-day of my day job is frustrating. So is everyone else’s. I ate shit when I was a waitress and a bartender, and I eat shit as a member of Congress. It’s called a job, you know?

So, yes, I deal with the wheeling and dealing and whatever it is, that insider stuff, and I advance amendments that some people would criticize as too little, etc. I also advance big things that people say are unrealistic and naïve. Work is like that. It is always the great fear when it comes to work or pursuing anything. You want to write something, and, in your head, it’s this big, beautiful Nobel Prize-winning concept. And then you are humbled by the words that you actually put on paper.

The way I read it, Ocasio-Cortez is backing up what I said in my blog posting yesterday. To repeat:

I think that people’s movements, especially in the United States, are leaderful. And we’re getting more people every day. The untold story is actually the momentum of what is happening on the ground...

The thing about people’s movements is that the opposite is very top-down. When you have folks with a profound amount of money, power, influence, and they really want to make something happen, they start with media. You look at these right-wing organizations, they create YouTube channels. They create their podcast stars. They have Fox News as their own personal ideological television outlet. Legitimate change in favor of public opinion is the opposite. It takes a lot of mass-public-building engagement, unrecognized work until it gets to the point that it is so big that to ignore (emphasis added).

Bottoms up, in other words. Not top-down. That is what Alexandria Ocasio-Cortez recommends to beat despair, and to change the world.
And I agree!
Image Credit:
https://www.newyorker.com/culture/the-new-yorker-interview/is-alexandria-ocasio-cortez-an-insider-now
To Subscribe Just Click This Link