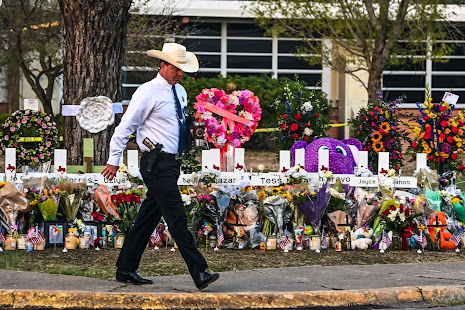 David French, writing for The Atlantic, says that we don't have any strategy that is likely to stop the cascade of mass shootings that seem to have been occurring  around the country in ever greater frequency:

A Rand Corporation review of studies of the effects of 18 policies designed to address mass killings... "found no qualifying studies showing that any of the 18 policies ... investigated decreased mass shootings.” To be clear, for nine of the policies (including red-flag laws and arming teachers), there were no studies that met Rand’s standards for quality and rigor. We don’t know the effects of those policies on the present crisis. It’s too soon to tell.

But nine policies were rigorously studied, and they include many of the most popular gun-control proposals in America, including background checks, bans on the sale of assault weapons and large-capacity magazines, minimum age requirements, and waiting periods. This finding is consistent with a famous fact-check by The Washington Post’s Glenn Kessler, where he found that neither enhanced background checks nor assault-weapons bans would have prevented recent, deadly mass shootings.

Here is what French concludes. We have, in fact, a "slow riot," as described by Malcolm Gladwell some years ago:

In 2015 Malcolm Gladwell wrote the single best, most insightful, and most sobering work yet written about mass shootings. The piece is complex, but the thesis is relatively simple—the United States is in the midst of something like a slow-motion riot, where each mass shooter is lowering the threshold for the next. The Columbine murders kicked off the “riot,” and we’ve been living with the consequences ever since.

Gladwell relied heavily on the work of Stanford sociologist Mark Granovetter, and Granovetter argues that it’s a mistake to view each incident on its own: In his view, a riot was not a collection of individuals, each of whom arrived independently at the decision to break windows. A riot was a social process, in which people did things in reaction to and in combination with those around them. Social processes are driven by our thresholds—which he defined as the number of people who need to be doing some activity before we agree to join them.

The "slow riot" theory is another example of the idea that we tend to do what is expected. French makes clear that something pretty much like what Granovetter describes is, in fact, exactly what is happening. The example provided by one mass shooting helps stimulate the next one. It's hard to know exactly how to turn the principle in a positive direction, in the case of mass shootings.
Still, hard as it may be to know how to accomplish what we need to do, we do need to be working on turning a "vicious circle" into a "virtuous circle." We need to "expect" something different from each one of us, and one way to try to generate a new dynamic is to start "expecting" social solidarity and support, as opposed to our expectations that it's "every person for themself."
When we think it's acceptable for poor people to sleep in drainage ditches, and along freeways, and on the banks of the river - and that's what we expect to see when we leave our own homes - we are telling everyone that no one cares about anyone's personal problems - even when they are dire. We are telling everyone that no one should expect any help or assistance, with any problem that a person might have.
That could lead people to cease caring about others, since caring about others is not what anyone should expect. That could lead people to kill other people, since.... Why not?
Social solidarity - providing "mutual aid" until everyone actually "expects" it - could help change the direction of the cumulative and circular causation now making things, every day, worse. Mutual aid could help "bend the arc." At least, maybe it could. Maybe it would help reduce the examples of mass shootings, until the "slow riot" simply dies away.
More social solidarity as a way to stop mass shootings? I'd say it's worth a try!
To Subscribe Just Click This Link
Image Credit:
https://newsletters.theatlantic.com/the-third-rail/629a49b29503360021895e95/gun-control-debate-uvalde-school-shooting/