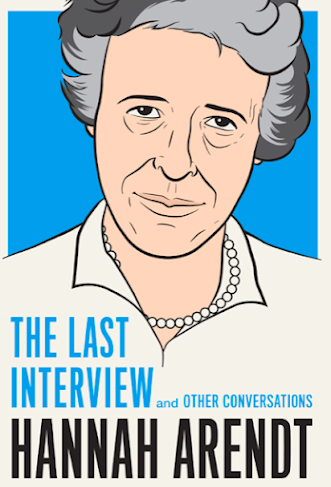 I am writing this blog item on June 10, 2022, but it is scheduled to appear online on June 28th. Consider this blog posting to be a cordial invitation to make a contribution to the Hannah Arendt Center, and then to join the "Hannah Arendt Virtual Reading Group," which will be meeting this coming Friday, on July 1st, and which will have a discussion on that day about the book pictured above. The Virtual Reading Group is led by Roger Berkowitz, the Academic Director and Founder of the Hannah Arendt Center For Politics And Humanities, located at Bard College, in upstate New York.
This note has been stimulated by the Virtual Reading Group discussion that took place on June 10th. That session also discussed The Last Interview, and one of the central discussion points was the difference between "philosophy" and "political theory." Arendt refused to be categorized as a "philosopher," and, in fact, criticized philosophy for having some rather destructive effects. Why?
Arendt believed that "philosophy" makes an implicit claim that it is supposed to, and can, discover the "truth" about things, and that this is a mistaken quest. Much mischief can ensue when those in power think they know the "Truth." In fact, Arendt says, there is no "Truth" in the political world we most immediately inhabit; there are only various "opinions." The proper work for us all, including specifically intellectuals, is not to try to discover what is "right," and what is "wrong," what is "true" and what is not, but to seek out ways to "reconcile" the various opinions that are inevitable in this world of plurality, with the objective of finding ways that we can live together (which is our inevitable fate).
My "Two Worlds Hypothesis," points out that all human beings live in, and have access to, what amount to two different "worlds." First, of course, we live in the "World of Nature," into which we have been most mysteriously born. At the same time, we most immediately inhabit a "Political World" that is the result of human action and choice. Sometime after I came up with this way to trying to explain our human situation (what Arendt calls The Human Condition, in one of her most important books), I realized that I had actually gotten this idea, in large part, from Arendt, although my familiarity with and love for her work was not the immediate cause of my formulation.
In the "World of Nature," there is, in fact, a "Truth," with a capital "T." The "Laws of Nature" do state what must and will happen. The Law of Gravity does not change, depending on one's opinion. In our "Political World," though, the "Human World" that we create ourselves, "anything is possible" (both wonderful and horrible things), and our opinions about what we should do, when backed with action, establish the "realities" we then confront both individually and collectively.
Anyone seriously thinking about "what should we do, now?" (and we all definitely need to be thinking about that) would benefit, I believe, from hearing what Hannah Arendt has to say about this primary question. Her voice is still speaking to us in the Virtual Reading Group.
So, to repeat myself, here is a cordial invitation to become a member of the Hannah Arendt Center, and to join the conversation that the Virtual Reading Group provides!
To Subscribe Just Click This Link
Image Credits:
https://hac.bard.edu/programs/vrg/