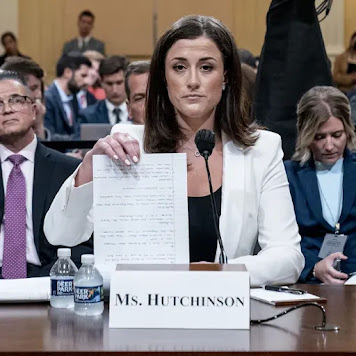 Cassidy Hutchinson, pictured, gave damaging testimony against our former president, Donald J. Trump, in a Congressional hearing held on Tuesday, June 28th. If you have been paying attention, you already know that.
In a column published in The New York Times on Thursday, June 30, 2022, columnist Frank Bruni called Hutchinson's testimony "A Ruinous Portrait of Narcissism." That is the title on the column I found in the hard copy edition of the paper delivered to my door on Thursday morning. If you click the link, above, you will find that the online headline is different. Online, Bruni's column has this title: "If Only Trump Had Been Stopped From Grabbing America’s Steering Wheel."
Bruni also wrote another column, online, and that second column was also dated, June 30th. That second column is titled, "Was Jan. 6 Really ‘Un-American’?"
In fact, the online title used for that second column would better convey the topic that Bruni was pursuing in the "Narcissism" column I read on Thursday morning. Here is how Bruni concluded his "Narcissism" column:

Hutchinson’s testimony contradicted Meadows’s earlier claim that the president never intended to go to the Capitol that day. And Peter Alexander of NBC News tweeted late Tuesday that a source of his was raising doubts about Hutchinson’s steering-wheel story.

Maybe she has it wrong, though Trump himself at one point gave an account to The Washington Post that in part matches hers. She seemed to me entirely credible, largely because the Trump she depicted is the only Trump I’ve ever observed: tyrannical and temperamental, heedless of the wreckage all around him, brimming with resentment, swollen with rage, fixated on his own glory and perverse in his definition of that.

She was clearly appalled by his behavior and chilled as she watched, in her words, “the Capitol building get defaced over a lie.”

“It was un-American,” she said, and that was the only part of her testimony that gave me pause. I’d like to agree with her. But after these past years — and all the ugliness that the Jan. 6 committee has illuminated — I’m just not so sure (emphasis added).

Was Trump's behavior on January 6, 2021, "un-American?" Or, to the contrary, did Trump's actions accurately reflect what America "is," or "has become?"
Bruni is "not so sure," and his doubts are certainly reasonable. If you decide that we best understand "reality" by observing what happens - if you mainly think of yourself as an "observer" - you'd pretty much have to agree with Bruni that it is not at all clear that Trump's behavior was "un-American." As Bruni puts it in that other column:

From the moment of Trump’s election to the present, I’ve been captivated not only by his profound amorality and his perversely gleeful determination to pit our country’s denizens against one another, but also by the tens of millions of Americans who applaud or shrug their shoulders about that.

I would like to urge us all to understand that who we "are" (both collectively and individually) is not best discovered by what we "observe," but that it is our own affirmations and actions that really determine and state what is true.
As I have said before, who "we are," in the end, is who we choose to be. We define ourselves by the "actions" we take, not by the "observations" we make about what we have done in the past. And let us remember, always, that our "actions" are never preordained or determined. What we do depends upon the choices we make, and "possibility" is the definition of the options available. Nothing about any one of us, or about any human reality, is inevitable.
I am, thus, in agreement with Cassidy Hutchinson, in her evaluation of Trump's conduct - and the conduct of all those who have aided and abetted his behavior. I affirm, with Hutchinson, that this behavior is "un-American." We should reject Bruni's "not so sure" conclusion.
It is my view that we should not concede that our national (and personal) failures define the essence of who we "are," either collectively or individually. If our understanding of reality is, truly, the "lowest common denominator," the worst that we have done in the past, let's start digging our graves right now, for there is no promise in the future when the past defines and limits us.
The past does not define. It only informs us about what has been. What we "will be," and thus who we "are," depends on what we do.
Right now.
To Subscribe Just Click This Link
Image Credit:
https://nymag.com/intelligencer/2022/06/cassidy-hutchinson-shows-trumps-complicity-in-capitol-riot.html