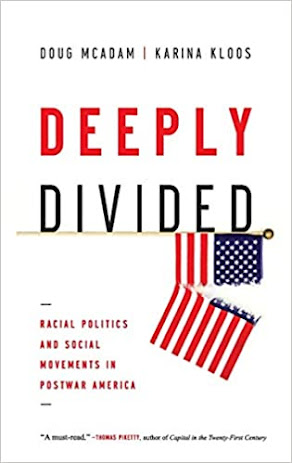 Deeply Divided (front cover pictured above) is a very thorough analysis of American politics - essentially from the time I was born (right near the end of World War II) up until the year it was published, 2014. The book is focused on national politics, and analyzes those politics in terms of successive presidential administrations. Because of that 2014 publication date, the administration of our most recent former president was not described.
Nothing in the book, however, suggests that the Trump 2016 electoral victory, and his subsequent administration, should have been any surprise, or that it charted much new territory. In fact, the authors indicate that three major factors have been driving politics in the United States in directions that encompass what we saw in the Trump Administration: First, increasing income, wealth, and social inequality; Second, increasing partisan polarization; Third, the attenuation of the nation's commitment to democracy.
If that is the list of the big three, is there any clear cause and effect relationship between these factors?
Well, the McAdam and Kloos book leads to the conclusion that these factors are all part of a process that could accurately be called "circular and cumulative causation." That phrase, by the way, is one of my favorites. I remember being blown away, intellectually, when I first read about circular and cumulative causation in Gunnar Myrdal's book, Economic Theory And Under-Developed Regions.
There is a tendency for us to think that all processes are "self-regulating," and we act as if Newton's laws apply in our human world. You know what I am talking about: For each action, there is an equal and opposite reaction.
That "Third Law of Motion" may be quite descriptive when we're talking about events in the physical world, but that's not true, at all, in the human world in which we most immediately reside. If your mind springs to the idea that the "market" is an example of how human processes are self-regulating, think again. In fact, Myrdal's law prevails in every aspect of the political, social, and economic world in which we most immediately (if not ultimately) live.
A friend suggested that I look up Deeply Divided after reading my blog posting yesterday, February 9, 2022, "The Business Of Political Polarization." Since Deeply Divided ends with a chapter entitled, "Restoring American Democracy," I was hoping for a specific program or prescription to break us out of the circular process that is undermining our our democracy, and vitiating our ability to live and work together to deal effectively with the multiple crises that confront us - which certainly include global warming and climate change.
Unfortunately, the last chapter of the book, like the seven preceding chapters, is rather light on "prescription" and heavy on "description." We are, as I frequently say, both actors and observers, and we sometime confuse the excellence and accuracy of our observations with action itself.
There is no doubt about the excellence and accuracy of McAdam and Kloot's book. It is well worth reading! However, there is no specific action program, in the last chapter, that tells us with any specificity how we might best overcome the process of circular and cumulative political disintegration in which we find ourselves so thoroughly enmeshed - a process so well described in Deeply Divided. I think we are left, really, with the prescription that I always advocate, using this phrase:

If we want to protect and preserve democratic self-government, we are going to need to get involved in government ourselves.

Politically, let's admit it, most of us are "observers," not "actors," and our observations are driving us ever more deeply into the political polarization that is itself a driver of inequality and the potential demise of democracy.
Here is how the final chapter of Deeply Divided begins:

Equality is fundamental to the theory of democratic governance. Here, however, we refer not to economic equality, but equality of voice in civic life. Political theorist Robert Dahl cuts to the heart of the matter when he asserts "that a key characteristic of democracy is the continued responsiveness of the government to the preferences of its citizens, considered as political equals."

One implication of this statement, it seems to me, does point to the legitimacy of the thought that each one of us is just as "good" as all those elected officials who seem to be in some different category. We are, indeed, their political equals - each one of us - and that means we should not be hesitant, at all, about engaging, ourselves, in both politics and government.
The statement just quoted also relates, I think, to something I said in that February 9, 2022, blog posting,  namely, that we need, in our political engagement, to "concede to win." In other words - this is an antidote to polarization - all those "deplorable" people with whom we disagree on so many things may be saying some things that are worthy of our respect and acknowledgement. They, too, are "political equals," and we need to treat them as such.
So, let's start doing things, instead of just observing how bad the world has become. Let's go "Talk to Strangers" and break out of the vicious circle into which we find ourselves ever more deeply drawn!
To Subscribe Just Click This Link
Image Credit:
https://www.amazon.com/Deeply-Divided-Politics-Movements-Postwar/dp/0199937850