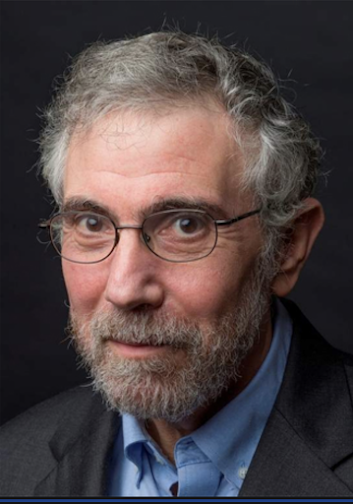 Paul Krugman, an economist who writes for The New York Times, is pictured above. In his column on March 26, 2021, Krugman addressed "The Decline of Republican Demonization." In using this phrase, Krugman was contending that the Republican Party used to be able to find political success by "demonizing" Democratic Party economic and other initiatives, calling them "job killers" and "socialist." This strategy of "demonization" almost always caused the Democrats to fall into "disarray," says Krugman, and so can be considered to have been a successful political approach. However, according to Krugman, the Republicans are not really doing that right now, or at least they are not pursuing that strategy very effectively. They're "low energy."
Krugman's column advances some theories on why the Republicans have failed successfully to pursue their traditional strategy, based on a "Demonization of the Democrats." Krugman's conclusion is that the Republicans have largely "forgotten how to govern."
The Democrats, on the other hand, says Krugman, who are popularly thought to be always in "disarray," have "held together and have done virtually everything they promised," as the Democrats have worked to pass the CARES Act, the recently-enacted two trillion dollar pandemic recovery bill.
In essence, though Krugman doesn't point this out specifically, Krugman is saying that one of the keys to "governing" (which the Republicans seem to have forgotten) is to "hold on" to a policy or political initiative and to push ahead until success is achieved.
As I read Krugman's Friday morning column, the words of a once-popular song sprang into mind. That song, "Hang on Sloopy," by the McCoys, a rock group from Union City, Indiana, was a big hit in 1965, the year I graduated from college. Somehow, and against my better judgment, that "Hang on Sloopy" refrain has been stamped indelibly into my auditory memory.
My judgment in the arena of musical appreciation can, I admit, be legitimately questioned. As frequent readers of this blog will know, I tend to operate on an approach to popular music that strongly favors songs that are written and performed by Nobel Laureates. This is, of course, an elitist approach, and in some ways my Bob Dylan prejudice is a kind of personal failure. Still, I would contend that "Hang on Sloopy" is mediocre, at best. Mediocre or not, I still do hear those words, "hang on Sloopy, Sloopy hang on," whenever I think about how "hanging on," in adverse circumstances, is the best kind of advice - and particularly in politics.
"Hanging on," in fact, is a requirement for good government. "Insistence," as I recently wrote, is another word for this vital ingredient. And way back in 2010, in "Under Weigh," and in Under Weigh #2, I spelled out that "hang on" principle, based on my personal experience in the Merchant Marine:

What I learned on the ship was that when it's time to change course, you have to do more than turn the wheel. First you turn the wheel. Then, you hang on! Try applying that rule to your evaluation of our Presidential politics - or our politics in general! Patience and persistence might be the necessary prescription for the kind of change we can believe in.

I also learned the principle from my own political experience. In 1978, the people of Santa Cruz County adopted Measure J, a growth management measure that I wrote, and that the Board of Supervisors placed on the ballot as a referendum measure. The passage of Measure J marked a fundamental change in land use policy for Santa Cruz County. It mandated the permanent protection of all commercially productive agricultural land, and directed new growth into areas already committed to urban development, thus stopping the sprawl that was devastating our environment (and the county budget).
Measure J also required that the amount of future growth that our county would accept should be decided, each year, by a public vote of the Board of Supervisors, so that our community could itself decide what kind of future growth it desired, and so that growth wouldn't just "happen to us." Measure J also required that a minimum of 15% of all new housing constructed in the unincorporated areas of Santa Cruz County must price restricted, so as to be permanently affordable to persons with average and below average incomes. That was an ambitious goal in 1978!
I considered Measure J to have been a major public policy achievement by our local community (one that has not been duplicated anywhere else in California, even to this day). I was proud to have been part of this successful effort. As I continued to serve on the Board (until 1995), the policies established by Measure J were under continuous attack - and this is one of the main reasons I "hung on" for so long (I served for twenty years on the Board of Supervisors).
Maybe it was after the passage of Measure J that the refrain of "Hang On Sloopy" found a permanent home in my brain! As a political principle, it's vital. Let's hope the Democrats remember that, right now, as our country faces a turbulent period in our national politics.
Image Credit:
https://stonecenter.gc.cuny.edu/people/krugman-paul/