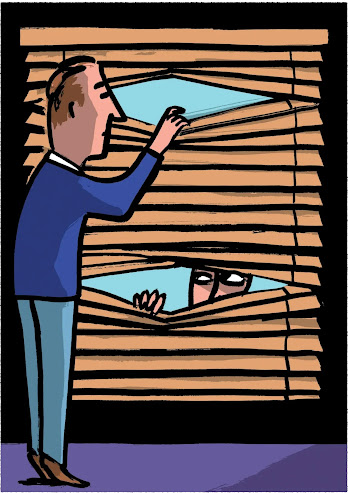 Writing in a New Yorker article that appeared in the magazine on June 17, 2013 (immediately following the public revelation by Edward Snowden that the United States government is spying on every telephone call we make, and every website we visit), historian Jill Lepore gave this account of how we came to believe that Americans have a "right to privacy":

In 1890, two Boston lawyers, Samuel Warren and Louis Brandeis, published an article in the Harvard Law Review called “The Right to Privacy.” ... Louis Brandeis was born in Kentucky in 1856. In the eighteen-seventies, he and Warren were classmates at Harvard Law School (Brandeis helped found the Harvard Law Review); after graduation, they opened a law firm together. Warren married Mabel Bayard, a senator’s daughter, in 1883. As the legal scholar Amy Gajda has shown, nearly sixty articles of gossip about the Warren-Bayard family appeared in newspapers between 1882 and 1890—including front-page stories, two weeks apart, about the funerals of Mrs. Warren’s mother and sister. Warren was infuriated. His household had been violated; his family’s privacy, like a letter, had been purloined. (A great many ideas about privacy have to do with hiding women and families.)

In “The Right to Privacy,” Warren and Brandeis argued that there exists a legal right to be let alone—a right that had never been defined before. Their essay lies at the heart of every legal decision that has been made about privacy ever since. The right to privacy, as they understood it, is a function of history, a consequence of modernity. Privacy, they argued, hadn’t always been necessary; it had become necessary—because of the shifting meaning and nature of publicity. By the end of the nineteenth century, publicity, which for Bentham had meant transparency (the opposite of secrecy), had come to mean the attention of the press (the opposite of privacy). Making public the deliberations of Congress was a public good; making public the names of mourners at Mrs. Warren’s mother’s funeral was not. (The same distinction informed the debate that resulted, in the eighteen-eighties and nineties, in the adoption of the secret ballot. Citizens vote in private; legislative votes are public.)
“The Right to Privacy” is a manifesto against the publicity of modernity: the rise of both the public eye (the eye of the citizen, and of the reporter) and the private eye (the eye of the detective). “The intensity and complexity of life, attendant upon advancing civilization,” Warren and Brandeis wrote, “have rendered necessary some retreat from the world, and man, under the refining influence of culture, has become more sensitive to publicity, so that solitude and privacy have become more essential to the individual; but modern enterprise and invention have, through invasions upon his privacy, subjected him to mental pain and distress, far greater than could be inflicted by mere bodily injury.” Modern life, according to Warren and Brandeis, consists of an endless chain of machines that threaten to expose the private to public view: “Instantaneous photographs and newspaper enterprise have invaded the sacred precincts of private and domestic life; and numerous mechanical devices threaten to make good the prediction that ‘what is whispered in the closet shall be proclaimed from the house-tops.’ ”
For Warren and Brandeis, the right to privacy was necessary to protect what they called the “inviolate personality.” As a pair of literary scholars has suggested, Warren and Brandeis got part of this idea from philosophers and part from poets. (William James wrote about a “hidden self”; William Wordsworth wrote about “the individual Mind that keeps her own / Inviolate retirement.”) Warren and Brandeis believed that the violation of the right to privacy constitutes a kind of wound—a puncturing of the soul—that might, finally, deaden our minds. The stakes had become, suddenly, very high.
Long before the Patriot Act, of 2001, and the expanded authorization of surveillance to fight terrorism—long, even, before the rise of the national-security state—Louis Brandeis predicted the encroachment of technologies of secrecy on the right to privacy. Brandeis was appointed to the Supreme Court in 1916. He was sitting on the bench when, in 1928, in Olmstead v. United States, the Court considered the constitutionality of wiretapping. Roy Olmstead was a bootlegger from Seattle who had been a police officer before he was arrested for violating laws prohibiting the import and sale of alcohol. He was arrested in 1924; his conviction rested on evidence obtained by tapping his telephone. The question before the Supreme Court, in 1928, was whether evidence acquired through wiretapping was admissible in criminal proceedings, or whether the gathering of that evidence violated the Fourth and Fifth Amendments. In a five-to-four decision, the Court affirmed Olmstead’s conviction. (Olmstead served three years’ hard labor but was pardoned by Franklin Roosevelt, in 1935.) Brandeis dissented: he argued that tapping Olmstead’s telephone constituted a violation of his right to be let alone.
Brandeis’s dissent in Olmstead is, in effect, a continuation of the argument that he had begun in 1890. He thought that wiretapping was just a new form of coerced confession—the replacement of “force and violence” by wires and electrical current. At one time, Brandeis said, the government “could compel the individual to testify—a compulsion effected, if need be, by torture. It could secure possession of his papers and other articles incident to his private life—a seizure effected, if need be, by breaking and entry.” But, in the twentieth century, he went on, “subtler and more far-reaching means of invading privacy have become available to the Government. Discovery and invention have made it possible for the Government, by means far more effective than stretching upon the rack, to obtain disclosure in court of what is whispered in the closet.”
And the invasion wouldn’t end there. “The progress of science in furnishing the Government with means of espionage is not likely to stop with wire tapping,” Brandeis predicted. “Ways may some day be developed by which the Government, without removing papers from secret drawers, can reproduce them in court, and by which it will be enabled to expose to a jury the most intimate occurrences of the home (emphasis added).”

Lepore, however, noted a certain irony in our contemporary wish for "privacy." In fact, said Lepore:

In the twentieth century, the golden age of public relations, publicity, meaning the attention of the press, came to be something that many private citizens sought out and even paid for. This has led, in our own time, to the paradox of an American culture obsessed, at once, with being seen and with being hidden, a world in which the only thing more cherished than privacy is publicity. In this world, we chronicle our lives on Facebook while demanding the latest and best form of privacy protection—ciphers of numbers and letters—so that no one can violate the selves we have so entirely contrived to expose (emphasis added).

I was reminded of Lepore's comments on privacy and "publicity" when I read Nicholas Kulish's article, "Public Image." His article can be found in the February 28, 2021, issue of The New York Times Magazine.
Kulish's article is delightful, taking you behind the scenes with the "Influencers" who now seek public acclaim (and money) by uploading highly curated views of their private lives to all who might want a peek and the scenes behind the curtain. And "scenes" they definitely are.
To get the picture, just click the following link to visit "Influencers In The Wild," a collection of videos showing how TikTok and other social media influencers do their thing.
Lepore was writing before there was an "Influencers In The Wild," or any occasion for such an examination of how those social media "private" scenes are produced. She captured it completely, though. At least I think so. This is where we really are:

There is no longer a public self, even a rhetorical one. There are only lots of people protecting their privacy, while watching themselves, and one another, refracted, endlessly, through a prism of absurd design.