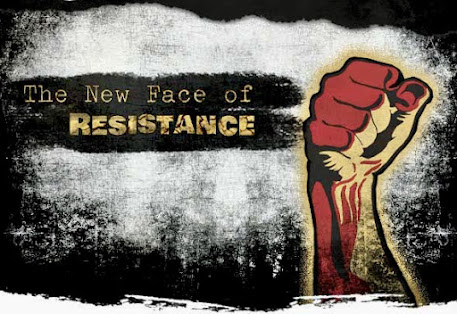 "Resistance" is a political term with which I have long been familiar. "The Resistance" is what we called the anti-draft movement in the 1960's, a movement with which I, as a draft resister, profoundly identified.
The above graphic is a more recent use of the term and comes from the Blackspot Collective, which is associated with Adbusters. I received a bulletin in my email, not so long ago, with this image at the top, and with this message below:
oooOOOooo
This Is the New Face of Resistance
Let’s get into something personal right off the hop.
Let's talk about resistance.

Resistance is what people feel when they just can’t face what needs to be done. Something important is right in front of them, but it’s so hairy, so scary in its implications on their life, their cozy way of keeping on keeping on, that they can’t deal with it.
Resistance grips us when our very soul recognizes just how much is on the line. Like right now.
Caught in an existential crisis with no obvious way out, we begin to question the hidden coordinates of our reality and start thinking about a new operating system for Planet Earth. We hatch a new grand narrative, a set of ideas so fundamental, so systemic, so profound that a sane sustainable future is unthinkable without them.
And then we deploy them.
At this critical juncture for our species, this is the new face of resistance. In our upcoming mindbomb, AB 153: The New Left, we unleash a movement that operates completely outside of geographic borders and political structures — a Third Force.
oooOOOooo
If you don't really understand what this means, I am not a bit surprised. I don't either. For some time, Adbusters and its Blackspot Collective have been sending out advisories that something big is on the way. A "mindbomb," I guess we should be expecting. Issue #153 of Adbusters (the magazine) seems to be where the revelation will be found.
Thinking about "resistance," as depicted above, I am starting to believe that I may be more committed to the idea of "insistence," instead.
If that blood red fist is the "new face of resistance," then an appeal to get involved with a new resistance movement might actually be a call to physical violence, and perhaps an invitation to overcome any personal or internal "resistance" to using personal and political violence to achieve social, political, and economic change. That may not be what is being talked about here, but if that's the idea, that kind of "resistance" is not an attractive proposition, at least to me!
My "resistance" during the Vietnam War was in direct opposition to violence, and operated on the model set by Dr. Martin Luther King, Jr. That's the kind of movement with which I was, and still am, willing to get engaged. What the Blackspot Collective is talking about might be a call to a renewed nonviolent effort to change the world - or it could be a call to something else. It's not really clear, but I'm nervous about what that message, and specifically that graphic, are meant to convey.
This brings me to the idea that we should probably be thinking about "insistence," instead of "resistance." That is perhaps where we ought to begin. Gandhian nonviolence, which served as a model for Dr. King, was premised on what Gandhi called "satyagraha," or "clinging to the truth." The idea, in other words, was that individuals would organize themselves to "insist" (nonviolently) that the society actually do the "right" thing. Those committed to the cause would certainly "resist" any effort to dislodge them from their "insistence" that the right thing be done, but the major effort was "insistence" on necessary change, not "resistance" to the unsatisfactory status quo.
I continue to think that this is the basis for all effective and transformative political action. It is a way to commit oneself to a positive effort, instead of framing political action as negative and oppositional. It is also an approach that is premised on a realization that people have power. "Resistance" is premised on the idea that power is virtually all on the other side, and that we therefore must "resist" that power, as our first order of business. Well, we must, of course, resist those who perpetrate injustice, but far more important is the positive position, in which we simply insist that justice be done.
I am hoping that the Blackspot Collective, and all of us, are seeing things in this light. We must insist on racial justice, we must insist on the elimination of the obscene income and wealth inequality that has blighted our common lives, and we must insist on an end to the combustion of fossil fuels, to save our planet.
We know what's right. Can we cling to the truth?
Resistance, is fine. It's necessary. But insistence comes first!
Image Credit:
http://4eomt.r.ag.d.sendibm3.com/mk/mr/hoNzoHI55RqIWHbt54SjH7xjo_kitpxfeM_dyOg8oA3pufsU99MYTV10-PDLJG7gpYFLUZMoUbDJJzmQ98DEWi5cUDX6ARCIMkFd3G4igWMygMHu