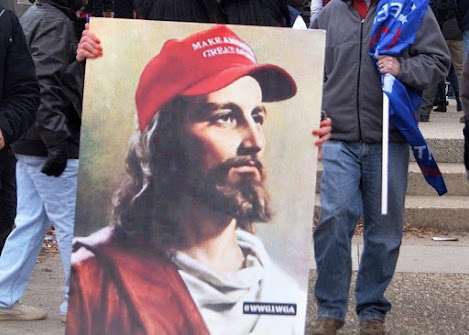 David Altheide, who is Regents' Professor Emeritus of the School of Justice and Social Inquiry at Arizona State University, has written a book titled, Creating Fear: News and the Construction of Crisis. A shorter version of what I assume is his basic argument in the book can be found in Altheide's article in Counterpunch+. That article, which appeared on February 25, 2021, is titled, "Entertainment, QAnon, and the Politics of Fear."
Here is how Altheide begins that article:

Pogo’s wisdom applies to our country divided by the politics of fear: “We have met the enemy and he is us.” This is important because fear is the source of most anger and hate, which is fed by ignorance and stereotypes often promoted by popular culture and disinformation. Our current situation, highlighted by digital misinformation and by the absurd QAnon conspiracy of a government run by satanic worshipping pedophiles, is enabled by a profitable entertainment media industry fueled by fearful messages and images, as well as new communication formats that manipulate audiences.

My argument is that fear has been transformed by an entertainment oriented popular culture, including news organizations, as well as public agencies and officials who have a stake in fear. They provide the content for the ever-expanding market for entertainment. And it is fear that makes for good entertainment such as Donald Trump’s reality TV persona (“The Apprentice”) as well as his Presidential campaign and four years in office powered by the politics of fear that appealed to many of his followers (emphasis added).

Fear, as Altheide properly observes, demands our attention. It also "entertains" us. Fear sells!
You'll remember, I am sure, what the guy pictured above said, the one with the MAGA Hat. That's the picture Altheide placed at the top of his Counterpunch+ article. It's pretty good advice:
Fear Not!
Image Credit:
https://www.counterpunch.org/2021/02/25/entertainment-qanon-and-the-politics-of-fear/