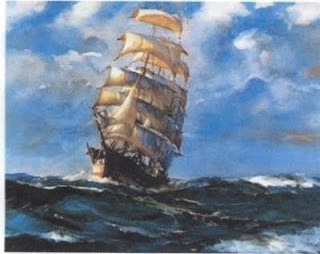 I suppose the phrase "under weigh" might refer to the actions of a cheating butcher. But that's not what I mean.

After dropping out of law school in 1968, I joined the merchant marine, and I took one memorable trip. The ship began its trip in Norfolk, Virginia; proceeded through the Great Lakes, where we picked up cargo; then went through the Panama Canal to Manila, Japan, and Vietnam. We returned to San Francisco, where the ship was relegated to the dead ship graveyard near Benicia. I served as part of the caretaker crew, and was one of the last to leave the ship. I always look, as I drive by on my way from Santa Cruz to Sacramento, but I can never really distinguish the ship I was on. That's natural, since it was not, in fact, a very distinguished ship at all.

I did learn some things on that ship, however, that have stood me in good stead, and one of them has to do with "weigh." I will never forget being on the bridge of the ship as the Captain gave an order to change course. The helmsman turned the wheel, and I looked ahead, and I looked at the compass that noted our direction, and I was amazed to find that the ship did not actually change course at all. At least, not right away!

When there is an object of great weight moving in a particular direction, the object has such momentum (called "weigh" in nautical terms) that it takes a very long time to modify its course. In the world we create, where "changes of course" are theoretically possible at any time, the momentum of the past has such great weight that it seems that the actions we take to modify our direction will never result in an actual change.

What I learned on the ship was that when it's time to change course, you have to do more than turn the wheel. First you turn the wheel. Then, you hang on! Try applying that rule to your evaluation of our Presidential politics - or our politics in general! Patience and persistence might be the necessary prescription for the kind of change we can believe in.