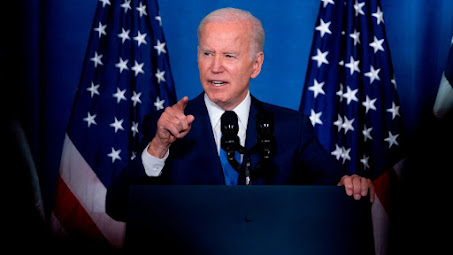 I don't, generally, have a lot of good things to say about the editorial columns published in The Wall Street Journal. However, I think that The Journal's editorial statement on November 4th, "Biden's Missing Democracy Pages," makes an important point. The Journal's statement is a comment on President Biden's November 2nd speech at Union Station in Washington, D.C. Here, in its entirety, is The Wall Street Journal's editorial response to the president's speech:
oooOOOooo
Biden's Missing Democracy Pages
President Biden delivered a televised speech Wednesday night telling Americans that “democracy is on the ballot for all of us.” He warned at Union Station about political violence and said all candidates need to honor election results for democracy to prevail and prosper.
He also linked the recent assault on Paul Pelosi with the Capitol riot of Jan. 6. He warned in particular about the threat from Donald Trump and his election denial after 2020, and from “the MAGA Republican Party, the minority of that party.”
When Mr. Biden had finished, we wondered if he had inadvertently left something out. How could a presidential speech about democracy in danger, especially six days before Election Day, focus merely on the threat from one political party? Perhaps some pages had inadvertently fallen from the speech while they were being carried to the Oval Office by chief of staff Ron Klain.
With that possibility in mind, and in a spirit of goodwill, here’s what Mr. Biden might have added if he is sincere about our democratic peril and wants to persuade the country:

“My fellow Americans, I’ve mentioned the MAGA threat. But to preserve democracy, it will take the efforts and honesty of both political parties. And we Democrats need to acknowledge that most Republicans feel as strongly and sincerely about fair elections as we do. After the 2020 election, hundreds of Republicans were the most important obstacle to Trump’s false claims of a stolen election.

“Mike Pence in particular played a heroic role in refusing as Vice President to stop the Electoral College count. He was under enormous pressure from Donald Trump to do so, and he knew that refusing would jeopardize his chances of ever becoming President. But he stood on principle and followed the Constitution. I should thank him more often than I have, and I want to salute him tonight.

“There were also the many lawyers in the White House and Justice Department who refused to go along with the former President’s claims when they saw no evidence for them. Thank you, Bill Barr.

“There were Governors and state election officials who refused to follow Trump’s demand to find votes that didn’t exist. Thank you, Doug Ducey and Mark Brnovich.

“There were the many judges appointed by Donald Trump who examined the evidence and ruled against the fraud claims. Thank you, Mitch McConnell and Federalist Society for supporting those judges.

“Truth be told, some in my own Democratic Party have also contributed to the climate of political mistrust and animus. The ranks of election deniers include Georgia’s Democratic candidate for Governor Stacey Abrams, who refused to accept her defeat in 2018. My own press secretary, Karine Jean-Pierre, tweeted in 2020 that Georgia Gov. Brian Kemp ‘stole the gubernatorial election from Georgians and Stacey Abrams.'

“That was wrong, and I’ve asked Karine to apologize at her next press conference. I know she regrets that tweet.

“Worst of all, Hillary Clinton and many others claimed Donald Trump’s victory in 2016 was illegitimate and the result of Russian influence. Some in the FBI even lied to a secret surveillance court to spy on a Trump campaign official. That was wrong, and those lies have made it easier for Trump to exploit fears about a politicized ‘deep state,’ as MAGA Republicans call it. I hope that Secretary Clinton will also acknowledge the damage from those versions of the Big Lie.

“Democracy is too important to have a double standard for election denial. And from now on, including next week, I promise to call out members of my own party if they refuse to recognize they have lost an election after all the votes have been counted and confirmed.

“I also can’t absolve myself for sowing doubts about democracy. In my first year as President I referred to election changes being considered in Georgia as ‘Jim Crow 2.0,’ and I said the midterm election would be ‘illegitimate’ if laws like that passed.

“Well, the Georgia law did pass, and it looks on the evidence so far that voter turnout in Georgia will set midterm records. I was wrong to use such divisive language, and especially to invoke the shameful era of government racial segregation, to make a partisan point.”

We’d like to think Mr. Biden meant to include these missing pages in his speech. If they weren’t dropped accidentally, then perhaps he could include them next time. Otherwise his speeches about democracy will be dismissed as cynical and calculating partisanship.
oooOOOooo
I very much agree with the points made by the President in his November 2nd speech. "Democracy" really is "under attack," and "on the ballot." But here is what I think is the good point made by The Wall Street Journal.
Concessions Strengthen One's Argument
Because we need "democracy" to win, in the elections now taking place across the country, finding ways to acknowledge some of the positive statements and actions of leading members of the Republican Party could help accomplish that. And, as ever, speaking about "individuals," when criticizing and denouncing bad actions, rather than creating a "group" against which to clamor, will almost always be more persuasive to members of the "group" than any commentary that includes all members of the group in the denunciation.
Hillary Clinton's denunciation of the "deplorables" (essentially all Republicans in the way Clinton's remark came across) did not play well with those who saw themselves so labeled. That approach to politics may well have cost her the election in 2016. Denouncing "MAGA Republicans" as a group, and suggesting that they are the main threat to democracy, is virtually certain to alienate, not persuade, those who believe that Donald J. Trump and his "Make America Great Again" campaign are speaking to important concerns.
I am not a "MAGA" sympathizer - quite the opposite - but I want the Democrats on the ballot to win the political argument. Making concessions helps bring in those with whom you disagree, and gives you a shot at persuasion. Denouncing a group with which they identify tends to have the opposite effect.
Just a thought.
"Democracy" recognizes that we are "all in this together," and that it is legitimate for members of the body politic to have different views. Our political formulations ought to recognize this fact, not claim that those with whom we have political disagreements are somehow "outside the pale."
Obviously, this is a message that applies to both political parties, and to all our political leaders, including, specifically, that former president who is a way worse offender than our current one!
To Subscribe Just Click This Link
Image Credit:
https://www.cnn.com/2022/11/02/politics/read-joe-biden-speech-democracy-midterm-elections/index.html