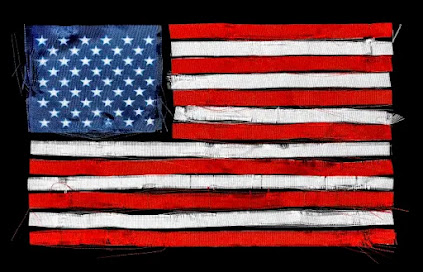 David Leonhardt writes for The New York Times. In his lengthy article, "A Crisis Coming: The Twin Threats to American Democracy," Leonhardt says this:

The United States today finds itself in a situation with little historical precedent. American democracy is facing two distinct threats, which together represent the most serious challenge to the country’s governing ideals in decades.

The first threat is acute: a growing movement inside one of the country’s two major parties — the Republican Party — to refuse to accept defeat in an election....

The second threat to democracy is chronic but also growing: The power to set government policy is becoming increasingly disconnected from public opinion.

There is no doubt in my mind that Leonhardt is right to be concerned about the state of democracy in the United States of America today. The fact that significant numbers of people are willing to deny the validity of our last presidential election, without producing any proof of any significant failure in the vote-counting process (just to place themselves in support of the person they wish had won) is definitely disturbing. It is a sign that our democracy is not in good health. Again, there is no doubt about that.
But let me push back just a bit on Leonhardt's second threat - or at least the way he has phrased it - and let me suggest that the "two" threats identified by Leonhardt may actually be the same threat. I am quarreling with Leonhardt's idea that "public opinion" is what should be guiding our politics.
In fact, our political system is not designed to reward or respond to "public opinion." There are many different opinions, about almost everything, and our system exalts this as a positive good. To measure "opinion," however, we use "polls," or "focus groups," or other evidence of what people are thinking. Polls, and poll results, are not "votes," and we do not, and should not, expect that the results of opinion polls (opinion) will determine the public policy decisions that will guide governmental action. Those who support former president Trump should not expect that their passionate opinion about Trump's claim to have won the election should determine whether or not he is president.
"Votes," not "opinion," is what counts in our system.
To cite to an important and pertinent example, and one alluded to by Leonhardt, that means that the fact that a majority of people in the United States think that a woman should have a right to choose whether or not to have an abortion during the first trimester of a pregnancy (which was the rule set down in Roe v. Wade) is not what does or should determine what the rules about abortion should actually be.
What counts is not "opinion" but "votes." That is the way political power is tallied up and the basis upon which that power is then made effective.
The Trump election deniers are really claiming that "votes" shouldn't matter, and that the decisions that determine what the government does should be based on the opinion of the public - which those who support Trump believe is strongly supportive of the former president. Naturally, those who don't support Trump think that public opinion is against him, not for him, but the argument must not be about "opinion," but about "votes."
The way Leonhardt phrases his "second" threat to democracy, claiming that we need to have political decisions that reflect "public opinion," is a rather slippery slope. His "first" threat shows just how slippery.
There are, as Leonhardt demonstrates, a number of structural aspects of our current governmental system that make it possible for there to be decisions that fail to conform to the overall "public opinion," on abortion and on other issues. I am not much moved. If there are deficiencies in how we have structured our government (I will stipulate that there are) then we need to change the system. I pointed out in another recent blog post that there are mechanisms to change the Constitution, if it comes to that.
In fact, though, the real source of the disconnect between "public opinion" and "public policy," is that too many people think of government as something that happens to them, instead of something they do themselves. We have "opinions," and we root for the home team. Maybe we click on those political emails that I find, myself, to be so unappealing. The point is, we are ever less willing, most of us, to recognize that a system of "self-government" means that we must get engaged ourselves.
If we lose "democracy," or our "democratic system," the fault is not that governmental institutions are not reflecting "public opinion." Who knows, really, what that public opinion is, until the votes are counted?
I have engaged in a lot of politics (mostly at the local level). It requires personal involvement, door-to-door excursions to talk to strangers, and hard-headed demands backed up by whatever political tools are currently available.
Politics cannot be carried out "online." It is not a "spectator sport."
"Opinion" is fine, but political power becomes effective when the public with opinions mobilizes to obtain the right to govern.
It's the "votes" that count.
POSTSCRIPT:
Just in case you haven't noticed, your last chance to vote in our current elections - affecting national, state, and local policy - is next Tuesday, November 8th. Whatever your opinions, make sure your votes will help advance the policies, and the politicians, you prefer.
To Subscribe Just Click This Link
Image Credit:
https://news.yahoo.com/crisis-coming-twin-threats-american-165338461.htm