#257 / Constitutional Revisions In The News 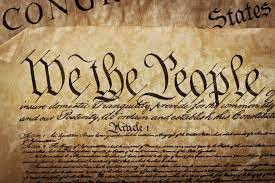 On Monday, September 5, 2022, The New York Times ran two articles that were, to my mind, related. Although the articles touched on different events, in different countries, and appeared on different pages of the newspaper, both of the articles had this in common: each article discussed efforts to revise a preexisting constitution.
On Page A10, in the hard copy edition of the paper, Carl Hulse talked about Republican Party efforts to convene a Constitutional Convention, to revise the United States Constitution. Hulse's article was headlined, "Republicans Eye a Constitutional Convention." Online, as is often the case, the headline is slightly different: "A Second Constitutional Convention? Some Republicans Want to Force One."
On Page A8 of the same edition of The Times, Jack Nicas' story was headlined as follows: "Chileans on Track to Reject An Ambitious Constitution." That's the hard copy version. The headline you'll get on the online story is a bit more definitive: "Chile Says ‘No’ to Left-Leaning Constitution After 3 Years of Debate."
The news from Chile, it seems to me, was somewhat comforting for those who worry that efforts at constitutional revision in the United States might ignore what the people actually want, and enshrine a constitutional system that would eliminate personal and political freedoms. That concern is the concern directly discussed in Hulse's article:

Russ Feingold [is] the former Democratic senator from Wisconsin and president of the American Constitution Society, a liberal judicial group.... Mr. Feingold sees the prospect of a constitutional convention as an exceptionally dangerous threat from the right and suggests it is closer to reality than most people realize as Republicans push to retake control of Congress in November’s midterm elections.

“We are very concerned that the Congress, if it becomes Republican, will call a convention,” said Mr. Feingold, the co-author of a new book warning of the risks of a convention called The Constitution in Jeopardy.

“This could gut our Constitution,” Mr. Feingold said in an interview. “There needs to be real concern and attention about what they might do. We are putting out the alert.”

While the rise of election deniers, new voting restrictions and other electoral maneuvering get most of the attention, Mr. Feingold rates the prospect of a second constitutional convention as just as grave a threat to democratic governance.

“If you think this is democracy’s moment of truth, this is one of those things,” he said.

Elements on the right have for years been waging a quiet but concerted campaign to convene a gathering to consider changes to the Constitution. They hope to take advantage of a never-used aspect of Article V, which says in part that Congress, “on the application of the legislatures of two-thirds of the several states, shall call a convention for proposing amendments.”

Throughout the nation’s history, 27 changes have been made to the Constitution by another grindingly arduous route, with amendments originating in Congress subject to ratification by the states

With sharp partisanship making that path near impossible, backers of the convention idea now hope to harness the power of Republican-controlled state legislatures to petition Congress and force a convention they see as a way to strip away power from Washington and impose new fiscal restraints, at a minimum.

“We need to channel the energy to restore and reclaim this country’s traditional values and founding principles of limited government closest to the people and individual freedom and responsibility,” Rick Santorum, the former Republican senator from Pennsylvania who has become a convention champion, told a conservative conference this spring in the state.

Article. V.
The Congress, whenever two thirds of both Houses shall deem it necessary, shall propose Amendments to this Constitution, or, on the Application of the Legislatures of two thirds of the several States, shall call a Convention for proposing Amendments, which, in either Case, shall be valid to all Intents and Purposes, as Part of this Constitution, when ratified by the Legislatures of three fourths of the several States, or by Conventions in three fourths thereof, as the one or the other Mode of Ratification may be proposed by the Congress; Provided that no Amendment which may be made prior to the Year One thousand eight hundred and eight shall in any Manner affect the first and fourth Clauses in the Ninth Section of the first Article; and that no State, without its Consent, shall be deprived of its equal Suffrage in the Senate.

A close reading of Article V will show that while two-thirds of the states can require that the Congress call a Convention for proposing amendments, it will take three-fourths of the states (or conventions in three-fourths of the states) actually to ratify any amendments proposed. Calling a convention is not the end of the story. Let's not assume that if the Republicans were to succeed in requiring Congress to call a convention, the outcome of this effort would automatically result in the total fulfillment of the fever-dream wishes of a bunch of "semi-fascists," to use our president's terminology.
For instance, consider these observations:

#1 If we really think about what the current Supreme Court is doing, the Court is already making fundamental changes in our Constitution, with little or no ability of "the people" to have any say, whatsoever, in what those changes do. Maybe it would be better to get things out on the table, and to make clear that changes (like the reversal of Roe v. Wade, for instance) should be made through public votes, not by judicial partisans, hidden in the backrooms of a fenced-off Supreme Court building.

#2 As that story from Chile illustrates, proposals to change the Constitution that don't conform to what the majority of the people want can be defeated, politically. What Chile can do, can be done here, too.

#3  As you will discover if you read Elizabeth Beaumont's excellent book, The Civic Constitution: Civic Visions and Struggles in the Path toward Constitutional Democracy, which I have mentioned in this blog before, our original Constitution was not, simply, the result of a bunch of elite political leaders, meeting in a closed session in Philadelphia. In fact, there was vigorous public debate and discussion, and the Constitution ultimately adopted would not have been enacted if the Bill of Rights had not been added (among other things). In other words, we have ample evidence from our own history that Constitutional changes can be made subservient to the political will of the people.

#4 As Hulse's article in The Times points out, it is not only the "semi-fascists" who are thinking about a new Constitutional Convention: "some liberals have welcomed the idea of a convention as a way to modernize the Constitution and win changes in the makeup and power of the Supreme Court, ensure abortion rights, impose campaign finance limits and find ways to approach 21st-century problems such as climate change."

#5 What if the public at large got engaged in reviewing and revising our Constitution? Would that actually result in the "end of democracy?" In terms of what the majority of Americans want, I'm betting that all of the following propositions would have a lot of public support: (A) More control over guns; (B) Protections of a woman's right to choose; (C) Housing and health care for all; (D) Limited terms for Supreme Court Justices; (D) Effective racial justice; (E) An end to the Electoral College; Etc.

It might just be that getting the people of the United States to pay attention to their ultimate right to control their government could be rejuvenated by a serious effort to engage the nation in a reconsideration of how we want our government to operate, and what we think it should do.
Obviously, bad outcomes, not good outcomes, are possible when we think about rewriting the Constitution, but let's remember what the very first line of our current Constitution proclaims: "We, the people...." are ultimately in charge.
We can be effectively in charge, not just "theoretically" in charge, if we get engaged in the exciting prospect of self-government, ourselves!
To Subscribe Just Click This Link
Image Credit:
https://www.livescience.com/US-Constitution.html