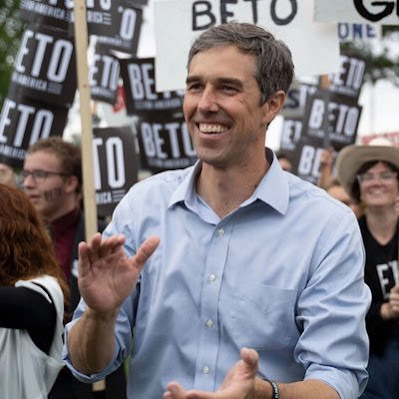 Beto O'Rourke, pictured, is a Texan from El Paso who has served in the United States House of Representatives, and who ran, unsuccessfully, for the United States Senate, losing to one of the least appealing of our nationally-known politicians, Ted Cruz.
Now, O'Rourke is running for Governor, attempting to oust the current Governor of Texas, Greg Abbott (also an unappealing public official, in my opinion). New York Times columnist Charles Blow has interviewed O'Rourke, with the column headlined as follows in the September 26, 2022, hard-copy edition of The Times: "O'Rourke Condemns Dehumanizing Stunts." One such "stunt," alluded to in the headline, was Governor Abbott's action in busing immigrants to "far-away sanctuary cities run by Democrats."
I am drawing your attention to this column, as the November election gets ever closer, because of the following observation by O'Rourke, made as the polls showed him losing to Abbott:

One analysis by political data and polling firm TargetSmart found that thousands upon thousands of voters had registered in the state since the Dobbs ruling, and they were “younger and more Democratic than before the June ruling,” according to The Houston Chronicle. O’Rourke believes these voters are going to help make the difference for him and produce an upset.

What O'Rourke is saying is that we should not buy into the analysis that we are, more than anything else, a bunch of solitary "individuals," engaged, necessarily, in  competing against each other. We are, ultimately, "in this together," and when times are really tough, and when tough challenges beset us, we need to understand our real situation.
It's you AND me. Right?
To Subscribe Just Click This Link
Image Credit:
https://twitter.com/betoorourke