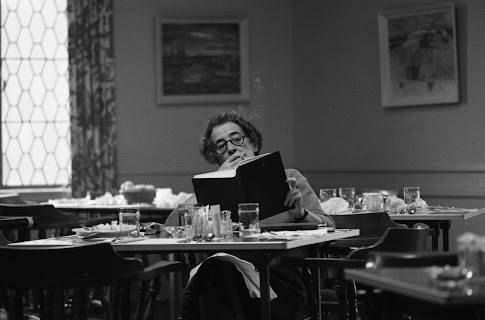 Hannah Arendt, the eminent political theorist who is pictured above, arrived in the United States in 1941. Thirty-two years after her arrival, in an interview with film producer Roger Errera, Arendt was asked what her "main impression" of the United States was, when she first arrived.
Here is what Arendt said, in an interview published in The Last Interview and Other Conversations:

My dominant impression... Well. See, this is not a nation-state. America is not a nation-state and Europeans have a hell of a time understanding this simple fact, which after all they could know theoretically; ... this country is united neither by heritage nor by memory, nor by soil, nor by language, nor by origin from the same ... There are no natives here. The natives were the Indians. Everyone ... is a citizen and these citizens are united only by one thing ... by simple consent to the Constitution ... a sacred document ... the constant remembrance of one sacred act, and that is the act of foundation. And the foundation is to make a union out of wholly disparate ethnic minorities and regions and still (a) have a union and (b) not assimilate or level down these differences (emphasis added) [p. 112].

Arendt is responding to the question, in other words, with something very much like my "E Pluribus Unum" speech (or blog posting, actually). She is also making the case, without using the word, for what might be called "American exceptionalism."
As Wikipedia explains it, American exceptionalism is the "idea that the United States is inherently different from other nations ... with the implication that the country is both destined and entitled to play a distinct and positive role on the world stage (emphasis added)."
It looks to me like Arendt might say that there is, in fact, such a thing as "American exceptionalism." However, I don't think Arendt would claim that the fact that America is "inherently different from other nations" entitles the United States to try to "run the world."
The United States (speaking through its leaders) does, quite often, seem to think it should be running the world, and that being "exceptional" gives us that right. This is not a good look. It is dangerous, too, when you think about it.
LOTS of nations now have atomic weapons, and while the United States, so far, is the only country that has ever used an atomic weapon to kill hundreds of thousands of people with a single bomb, we are being warned that we had better not push our luck. We are, says United Nations Secretary-General Antonio Guterres, in a statement made on August 1, 2022, just "one step from nuclear annihilation."
How should we think about what is, in fact, "exceptional" in the American experience, and in what the Declaration of Independence and the Constitution have made into our national purpose?
I would like to suggest that making "a union out of wholly disparate ethnic minorities and regions," without leveling down or assimilating our differences, is a model for what ought to be a global effort. We need to live together on Planet Earth, and we are going to perish if we can't achieve a worldwide union, without assimilating or leveling down our differences. Whether by unaddressed global warming or nuclear annihilation (and the first will probably lead us to the last, if nuclear annihilation doesn't come in first), we have to find a way to "live together" as one.
We Are The World. E Pluribus Unum. This is an exceptionally important message to the world, and the United States has an exceptional chance, because of our national history striving for just this - and with some, though admittedly limited, success - to advance this effort to the global stage.
Because the United States is, actually, "different" from other nations, we might just be able to inspire the kind of changes we all must achieve, together.
That is what "American Exceptionalism," properly understood, might be able to bring to the table today.
As Bob Dylan has put it in his song, "Soon After Midnight" (and I find I have previously associated Dylan's observation with what Hannah Arendt has said),  "It's Now Or Never. More Than Ever."
To Subscribe Just Click This Link
Image Credit:
https://www.exberliner.com/art/the-genius-of-hannah-arendt/