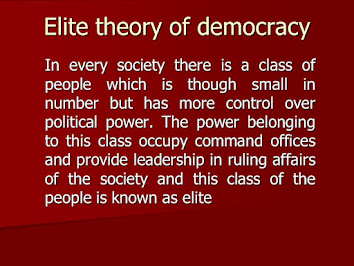 I most often disagree with what I read on the editorial pages of The Wall Street Journal, but I faithfully subscribe to and read that newspaper. It is important, I think, not to seal oneself off from the opinions of those with whom you know you disagree. Sometimes, we find that the "other perspective," the one with which we know we disagree, has some truth to it.
Emily B. Finley, writing on September 26, 2022, charged that our "Democracy" is, all too often, "By and For the Elites." The "elite" personages she specifically references are Thomas Jefferson, Woodrow Wilson, Barack Obama, and our current president, Joe Biden. Her pitch, reproduced in its entirety, is below.
oooOOOooo
‘Democracy’ by and for the Elites
Tocqueville predicted that an ‘immense and tutelary power’ would replace genuine popular rule.

By Emily B. Finley
President Biden’s Sept. 1 speech in Philadelphia on “unity” is a poignant example of the confusion surrounding the concept of democracy. Mr. Biden declared that MAGA Republicans threaten “the very foundations of our republic.” The phrase a “threat to American democracy” is so commonplace these days that it hardly carries any meaning—except that it encapsulates the reigning ideology of our time, an ideology so pervasive that it almost goes unnoticed. It is like the air we breathe.

I call it democratism. It is an imaginative and idealistic understanding of popular rule that disdains ordinary people and looks to a cadre of so-called experts to operate the levers of power. Under this ideology, “democracy” and “the people” are rhetorical cover for the will of the elites. Think of social media’s censorship of misinformation in the name of “supporting democracy” and “upholding free expression.” How is it that censorship passes as upholding free expression?

“War is peace. Freedom is Slavery. Ignorance is Strength” from Orwell’s “1984” comes to mind, but there is a long tradition in the West of this paradoxical interpretation of democracy. Enlightenment-era thinking, and arguably even Plato, puts forth the thought that an ahistorical ideal of justice ought to act as the primary guide to politics. Jean-Jacques Rousseau applied this idea in “The Social Contract.” The general will, Rousseau says, is what the popular will ought to be, even if it isn’t expressed by actual living people. The general will conveniently requires the translation of a wise legislator for its instantiation.

Many of the most vocal champions of democracy, from Thomas Jefferson to our own day, have been advocates of this Rousseauean inversion, using the word “democracy” as justification for what would otherwise be naked authoritarianism.

Jefferson is known for criticizing the Constitution on grounds that it wasn’t democratic enough and that a national government was a threat to liberty. This sounds democratic on its face, but a closer look reveals that he coupled celebration of the everyman to a belief that an enlightened aristocracy should be leading the people away from their more conservative social and religious instincts and toward a new age, free of old superstitions and backward ways. “The briar and bramble can never become the vine and olive,” Jefferson wrote in 1822. That isn’t wrong, but neither is it democratic. Jefferson derided his opponent John Adams as a “monocrat” and Adams’s administration a “reign of witches,” in large part because he believed that Adams was not sufficiently democratic.

Woodrow Wilson is another example of a democratist. Remembered as an archdemocrat, he advocated some of the most undemocratic measures in American history. He set precedents that until recently would have struck most Americans as violations of the First Amendment. By now, however, many on the left would look at the Sedition Act of 1918—which made it illegal “by word or act” to “oppose the cause of the United States”—as reasonable given Wilson’s promise to make the world safe for democracy. The related Espionage Act of 1917, which directed the postmaster general to censor news and publications critical of the World War I, is a precursor of President Biden’s ill-fated Disinformation Board and his administration's collusion with Twitter and Facebook to censor dissent about Covid.

Barack Obama’s 2011 “We Can’t Wait” initiative was a descendant of Wilson’s politics by administrative fiat. We “can’t wait for an increasingly dysfunctional Congress to do its job,” Mr. Obama declared. “Where they won’t act, I will.” His desire to take the reins from the people’s elected representatives, doubtless “in the name of the people,” is yet another example of the paradoxical effect of democratism: Let me be the people’s proper representative, the democratist says.

The word “democracy” no longer indicates much about popular rule. The word now merely refers to a hypothetical goal that gives those who invoke its holy name a mandate to do just about anything—even the opposite of what the people desire.

America is still breathing the musket fumes of 1776, and words that play to the imagination of America’s founding—“freedom,” “democracy,” “free speech”—are sources of enormous power for the apparatchiks warring, pillaging and censoring on behalf of those values. These abstract words help to maintain the facade of self-government.

Alexis de Tocqueville predicted that eventually an “immense and tutelary power” would replace genuine popular rule in America. The people would accept their tutelage, he says, because of their belief that they “themselves hold the end of the chain.” The soft despots today will undoubtedly continue to use the democratic lexicon even as they transform the fiber of the republic. What better way to pre-empt the opposition than simply to declare it “a threat to our democracy”?  [Emphasis Added]
oooOOOooo
I think there is some truth to Finley's argument. We cannot, properly, suggest that "democracy" is about "substance." It is mostly about "procedure." I teach a class at the University of California, Santa Cruz, in which we discuss contemporary problems involving "Privacy, Technology, And Freedom," and one hot topic is whether the internet platforms, like Instagram, Twitter, and Facebook, should be allowed, or even required, to censor those who have "undemocratic" views, those who engage in hate speech and the like. This issue is, specifically, addressed by Finley's opinion editorial.
When those with power (those "elite" types) can shut down speech with which they disagree, because it is so clearly "wrong," then we are outside the boundaries of what "democracy" is really all about.
Finley's point? As I say, I think there is some truth to it!
To Subscribe Just Click This Link
Image Credit:
https://slideplayer.com/amp/6839541/