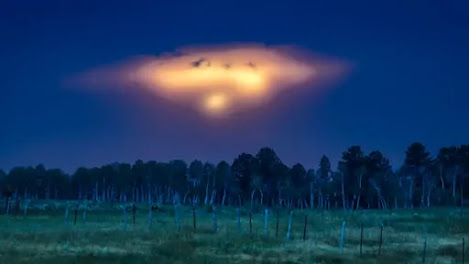 The Wall Street Journal has published an opinion piece by "Business World" columnist Holman W. Jenkins, Jr. Jenkins' column was titled, "UFO 'Mystery' Shouldn't Drag On." Meanwhile, on the same day - Saturday, October 29th - The New York Times ran a news article on UFO sightings.
Holman's point was that the United States government clearly knows something about UFO sightings that it is not telling the public, and the government should come clean, and share whatever information it has. As Jenkins notes: "the UFO commotion has largely been sustained by the U.S. defense establishment. Especially absurd is a situation in which unclassified reports assure us UFOs are a big mystery when the classified version may know exactly what they are."
I am not, generally, a fan of Jenkins' views, which are typically those of an apologist for the Republican Party and the extremely wealthy. In this case, however, I do think that Jenkins' point is right on target. Here is how I would put it:

Those on the "right" have been known to complain about the "Deep State." Let me join in their protests with reference, specifically, to those agencies of our government that purport to be dedicated to "national security." We cannot, actually, have democratic self-government if we, ourselves, aren't allowed to know what "the government" knows.
That all of us have the right to know what our government knows must be the general rule, and Jenkins is surely correct that the military establishment, and the so-called "national security" establishment, is a part of our government that seems to be interested in keeping the truth from the people.
To Subscribe Just Click This Link
Image Credit:
https://www.foxweather.com/earth-space/nasa-ufo-study