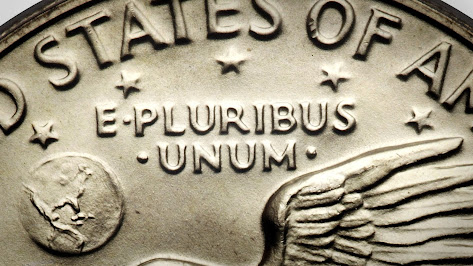 "E Pluribus Unum" - "Out of many, one." That statement, found on our coins, and on our paper money, and on the Great Seal of the United States, is considered to be the traditional motto of our nation. Generally, the statement is thought to describe how the thirteen original colonies came together to forge the United States, as a single and unified whole.
Until the Civil War, of course. Then, we had to do it all over again.
I have always liked that "Out of many, one" way of describing the United States. However, I have thought of this motto more in terms of the individual people who have come together to create and sustain our nation, as opposed to reading this statement as one that pertains to the states. After all, when we talk about "many," there are many more people than there are states, and in terms of the majesty and significance of the American accomplishment, the astounding fact that millions of people have come, from all parts of the world - from different backgrounds and different circumstances - and have together created a single and unified nation, is something truly extraordinary.
The American Revolution gave us our motto. We are, I'd like to suggest, at a time in which we might think, once again, of what kind of revolution might be required of us. Fundamental changes must be made, and most of us know it. Social, economic, and political changes are mandatory if we are to continue as one nation. As in our experience at the time of our Civil War, a fundamental reworking of what we have heretofore achieved is demanded (though I strongly suggest that violence and bloodshed are not required of us now).
In the 1980s, in Poland, ordinary men and women came together to achieve revolutionary changes in their nation - and largely without violence or bloodshed. Their motto was "Solidarity." That motto, it strikes me, is not so different from our traditional motto, "Out of many, one."
Let's think about how we might achieve that now, and renew our American accomplishment: Out of many, one.
It's still a good motto. It's still what we must do.
And "Solidarity?" That's what we must have to achieve it.
__________________________________________________
Image Credit:
https://www.thesprucecrafts.com/e-pluribus-unum-meaning-768856
To Subscribe Just Click This Link