#289 / Complications Of The Ukraine War 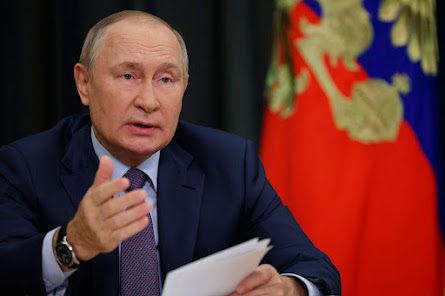 As I have revealed in previous blog postings, I am quite nervous about what flows from our sense that Ukraine is in the "right," with respect to the current and ongoing war, and that Russia is in the "wrong." However true that may be (and to be clear, I do think that is largely true), the sense that Ukraine is "good," and that Russia is "bad," may be stifling what could be a more vigorous effort to terminate the current war in Ukraine.
I think we ought to be trying to do that - to terminate the war - which might well mean that we should be less zealous about provisioning its continuance. The fact that Vladimir Putin, pictured above, has threatened to use nuclear weapons in the war (which no one denies he could do) has fueled my discomfort and concern. Our own president, Joe Biden, has candidly said that if Putin does use nuclear weapons that the world will then face "Armageddon."
I am unequivocally against Armageddon, which is a shorthand expression for "end of the world." I think the United States government should be against that, too. That means, from my perspective, that there should be a real, grassroots demand that our leaders start working to solve the problems that led to the current war between Russia and Ukraine, and to bring the war in Ukraine to an end, rather than simply continuing to help Ukraine "win" the war.
We need, in my view, to be at least somewhat skeptical of our own government, and not just assume, since we don't like what Russia and Mr. Putin are doing, that whatever our government says is the right reaction, and the right thing to do, is in fact the right reaction and the right thing to do. At the very least, we ought to be having a very spirited and public debate about what's going on, and what the United States should be doing about it.
Hillsdale College is a small, Christian, classical liberal arts college in southern Michigan. The college puts out a periodic newsletter, called Imprimis, which is unfailingly "conservative" in its political perspective. Imprimis has recently published an essay by Christopher Caldwell, which is titled, "Complications of the Ukraine War."
Below, I am providing an except from this article, the text with which Caldwell begins it. I encourage you to read the whole thing.

According to what we hear from the White House and from the television networks, the issues at stake in the Ukraine War are simple. They concern the evil of Vladimir Putin, who woke up one morning and chose, whether out of sadism or insanity, to wreak unspeakable violence on his neighbors. Putin’s actions are described as an “unprovoked invasion” of a noble democracy by a corrupt autocracy. How we ought to respond is assumed to be a no-brainer. The United States has pledged vast quantities of its deadliest weaponry, along with aid that is likely to run into the hundreds of billions of dollars, and has brought large parts of the world economy—particularly in Europe—to a standstill.
Now, whenever people in power tell you something is a no-brainer, there’s a good chance that it’s a brainer. And the Ukraine War is more complicated than we’ve been led to assume....

Besides reading this article, it probably also makes sense to read Mr. Putin's latest speech, which he gave at a ceremony welcoming new territories to Russia, such territories supposedly having voted overwhelmingly to leave Ukraine and join Russia.
Caldwell contends that "the Ukraine conflict is full of paradoxes and optical illusions, and that the theater we are entering has been, over the past 150 years, the single most violent corner of the planet.... Unless we learn to respect the complexity of the situation [he says], we risk turning it into something more dangerous, both for Europeans and for ourselves."
I tend to think that Caldwell is giving us some pretty good advice, here, but those reading this blog posting should realize that I long ago took a position on war in general, which definitely affects my current views on the war in Ukraine. From way back when (back when I resisted the draft, and refused to go into the United States Armed Forces to fight what the government claimed was a justified war in Vietnam), I have pretty much been "against war," period, and I am not much disposed to believe that we should all support our government, whenever it wants us to go to war.
And just to say it once again, I am against Armageddon, too! If you happen to share that view, consider letting other members of the public, and your federal representatives (from the President on down), know that you think our government should be trying to reconcile the parties and resolve the conflict,* not just push on, further, towards "Armageddon," because we know we're "right."
To Subscribe Just Click This Link
Image Credits:
https://www.politico.com/news/2022/09/28/china-and-india-on-putin-in-ukraine-00059382
*It appears that the U.S. government is currently taking the position that talking with Russia about ending the war would not be "constructive."