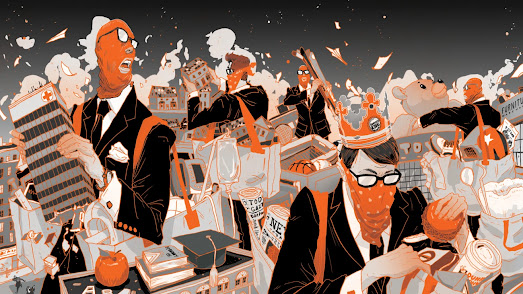 The May-June issue of Mother Jones magazine contains a major story on "Private Equity." The article is titled, "The Smash and Grab Economy," and it tells how "Private Equity" works, siphoning off the wealth created by our common efforts, and particularly by workers, and then funnelling that wealth to what Bernie Sanders has taught us to think of as "the billionaire class." The businesses which become the targets of a "Private Equity" takeover are drained of their resources until they die, as the victims of a vampire die.
As Mother Jones tells it, Houdaille Industries was the first example of a "Private Equity" takeover, in the early 1970s. The Mother Jones article provides all the gruesome details, and I recommend you read it. Santa Cruz County residents (among whom I am numbered) will also undoubtedly be interested in a current example of this economic vampirism, as outlined in a separate article, "Sold Out: How A Newspaper Got Gutted, and Other Tales From the Front Lines of Corporate Takeovers." That story, in the same edition of Mother Jones, outlines the takeover of the Mercury, a newspaper formerly published in Pottsdown, Pennsylvania.
That Pottsdown takeover was engineered by Alden Global Capital, which was founded in 2007, and which specializes in driving newspapers into extinction. You can read about how it all works in the Mother Jones article, or you can simply behold what is happening, right now, with the Santa Cruz Sentinel, which is being drained of all its vitality and life (and is surely almost ready to die and disappear completely). The Sentinel, too, like the Pottsdown paper before it, is a victim of Alden Global Capital.
I always list "wealth inequality," along with "global warming" and the "danger of nuclear war," as among the greatest challenges we face. All these challenges are life threatening, and we are going to have to make radical changes in order not to succumb.
Changing who controls money (and the corporations) can be done. Read those articles in Mother Jones to begin to see the dimensions of the problem.
To Subscribe Just Click This Link
Image Credit:
https://www.motherjones.com/politics/2022/05/private-equity-buyout-kkr-houdaille/