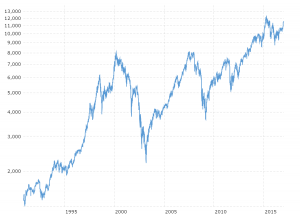 Here is how Wikipedia defines "Pump and Dump."

Pump and Dump is a form of securities fraud that involves artificially inflating the price of an owned stock through false and misleading positive statements, in order to sell the cheaply purchased stock at a higher price. Once the operators of the scheme "dump" (sell) their overvalued shares, the price falls and investors lose their money. This is most common with small cap cryptocurrencies and very small corporations or companies, i.e. "microcaps."

While fraudsters in the past relied on cold calls, the Internet now offers a cheaper and easier way of reaching large numbers of potential investors through spam email, investment research websites, social media, and misinformation.

I have often preached, here in this blog, against cryptocurrency investments. I do think that those offering cryptocurrency stocks are practicing a kind of "securities fraud," since there is no real "there, there," no underlying economic activity that produces goods and services with actual value, which then justifies an investment in the stock.
Anyone who believed that "fortune" would reward her or his investment in cryptocurrency, back in December of last year, has probably been disabused of that idea by now, given that virtually all cryptocurrencies plunged in value in June.
Matt Damon, who "pumped" cryptocurrencies, should be ashamed!
Why do I want to talk about this topic now? Well, an article in The Wall Street Journal has set me off. That article makes clear that there are various ways that relatively unsophisticated investors in the stock market might end up with big losses, while others will be able to walk away with big profits. No "false and misleading positive statements" may actually be necessary. Take Ryan Cohen's stock market activities, documented by The Wall Street Journal, as an example of what to watch out for.
Cohen is identified by Wikipedia as "an entrepreneur and activist investor." Ryan "founded e-commerce company Chewy in 2011, and was the company's CEO until 2018." Cohen has also been involved with GameStop, the stock of which has a history on the stock market that is not pretty, from the point of view of individual investors trying to make a killing, and getting killed, instead.
Most recently, as documented in the Wall Street Journal article I linked above, Cohen made a big investment in Bed Bath & Beyond (a company that definitely does produce real goods, worth real money, but which apparently has some significant business challenges). When Cohen made his large purchase of stock, which, of course, would give him the ability to influence how the company was run, his purchase was accompanied by a pledge that Cohen would use his newly-purchased influence to "force changes."
The result? Other (smaller) investors decided that things were going to get better for Bed Bath & Beyond. They invested, too, and the price of the Bed Bath & Beyond stock went up. Substantially up. Lots of smaller investors purchased the stock because they thought it was a good investment in view of Cohen's involvement, and Cohen's purported pledge that he would force needed business changes.
And what happened then? As The Journal says:

Mr. Cohen sold his entire stake in the home-goods retailer on Aug. 16 and 17, just months after he took a significant position in the company and pledged to force changes there. Shares tumbled after news of his sales came out on the afternoon of the 17th, but meanwhile Mr. Cohen benefited from a huge surge in volume that enabled him to sell millions of shares while prices rose.

Other than Cohen's "pledge," no additional "false and misleading positive statements" were made, but doesn't what happened here seem a lot like "Pump and Dump"? As it turns out, Mr. Cohen may have violated a Securities and Exchange Commission regulation, when he decided, suddenly, to sell all this holdings, but The Wall Street Journal article doesn't predict any dramatic enforcement action. The net result? Mr. Cohen made a big profit, and lots of small investors suffered big losses:

Bed Bath & Beyond stock has lost more than half its value since Mr. Cohen sold his shares. The company has selected asset manager Sixth Street Partners, a Dallas-based firm that makes loans to troubled companies, to provide new financing. Some vendors have been pulling credit to the company in recent weeks, sources have told The Wall Street Journal.

Some analysts say Mr. Cohen took advantage of the exuberance of those who favor speculative securities known as meme stocks. These investors, who call themselves “apes,” are among individuals who purchased a net $131 million of Bed Bath & Beyond shares on Aug. 16 and 17, according to Vanda Research. Filings show Mr. Cohen sold $178 million of the stock over that period.

“The apes have a target on their back,” said Daniel Taylor, an accounting professor at the University of Pennsylvania’s Wharton School of Business who studies insider trading. “It’s either the CEOs of the companies who are going to exploit that or these outside individuals like Ryan Cohen.”

Here are my two takeaways from this lugubrious story:
First, on a personal level, let's not be "apes." Let's not think that the best way to increase our individual wealth is to speculate in stocks, hoping that the price will go up after we buy. Cryptocurrencies are the worst, but even when we consider investments in productive companies like Bed Bath & Beyond, those who can control the market will play us for fools. If you must speculate, think about heading for an Indian Casino, so at least your gambling losses will benefit a native tribe.
Second, on a collective level, isn't it about time that we rearranged the rules governing our overall economy, so that we eliminate any reasonable expectation that a good way to make money is to speculate in stocks? The "finance" sector of our economy appears to be in charge of the Congress. That's why those who can manipulate the market (with or without "false and misleading positive statements") have established a system which is tilted to favor those with lots of money, instead of those who actually do the productive work that brings business and economic success to the giant corporations.
We could have a set of rules and regulations that would reward work and productivity, for all those whose work actually makes business ventures productive, so that underpaid workers don't have to hope they can outsmart the market to make it possible to find economic success. Worker cooperatives, requirements that companies pay their workers more money, and rules that require companies to give their workers an ownership interest in the company they work for would all be a better route to economic progress for ordinary, hard-working men and women.
But that's not how it is right now. The stock market system we actually have is turning us into "apes." Let's fight back. We do "live in a political world," and we can change the rules. That's what politics is all about, but our politics won't benefit ordinary men and women unless and until they get significantly involved in politics themselves, and make people count more than money.
-----------------------------
AND HERE IS A POSTSCRIPT:
It is unclear what the manipulations practiced on the stock of Bed Bath & Beyond had to do with the apparent suicide of a Bed Bath & Beyond executive, on September 2nd, but it's hard not to think that there is some connection.
To Subscribe Just Click This Link
Image Credit:
https://www.macrotrends.net/charts/stock-indexes